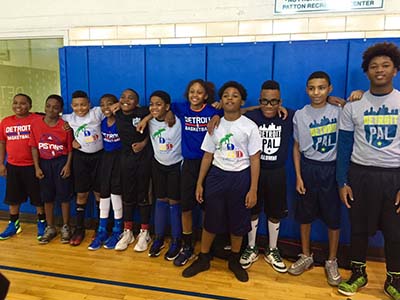 The Detroit Pistons today announced a $300,000 donation to the Detroit Police Athletic League to create and operate a new recreational basketball league for Detroit children.

“Sports can help teach valuable lessons about teamwork, leadership, and commitment,” says Tom Gores, owner of the Pistons. “Kids in Detroit need more opportunities to play in a safe environment with access to mentors who can help them learn important life skills.”

Gores says the more than 2,100 children will have the opportunity to receive basketball instruction, along with mentorship and leadership development, from volunteers and Detroit Police officers. He says Detroit Pistons point guard Reggie Jackson will serve as the honorary captain of the league through instructional videos and appearances.

The $300,000 funding is being provided by donations from Gores, Arn Tellem, vice chairman of Palace Sports and Entertainment, and the Detroit Pistons Foundation.

“We are committed to the neighborhoods and this partnership will allow us to bring organized basketball into every community around the city,” says Tim Richey, CEO of Detroit PAL, a nonprofit that offers sports and leadership programs for Detroit children.

In November, Detroit City Council approved transferring the vacant lot of the former Tiger Stadium to the Detroit Economic Growth Corp., which will allow Detroit PAL to pursue transforming the site into a new athletic field and its headquarters.