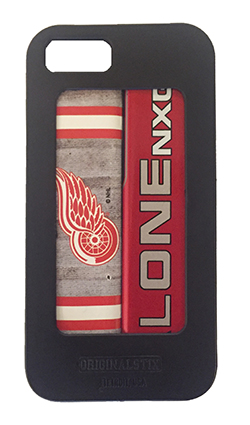 “We’re looking forward to expanding our product offering for NHL fans, so they can support their favorite NHL team,” says Terry Johnson, co-founder of Original Stix.

“There was really no meaningful or viable way to recycle (broken sticks),” Johnson says. “So a lot of these teams are happy to have them recycled instead of sent to landfills.”

The NHL phone cases, which will feature the Original Stix case design with logos from NHL teams, will launch in time for the holiday season. As part of the partnership, Original Stix will also be working with Hoot, a Newark-based mobile accessory company that has an NHL license, to create the cases.

The NHL partnership cases will retail for about $45, and be available for purchase on the Original Stix and Hoot websites; retailers throughout North America and Europe, such as Mitten Sports in Farmington Hills; and NHL arenas.

“(The partnership) will allow us to grow our business and get into new areas that we have not yet tapped into, including retailers, stadiums, and through our digital presence,” Johnson says.

In June, Original Stix participated in the Pitch to Rich Detroit competition hosted by Virgin Group’s Richard Branson. Since then, Branson invited the company’s founders to participate in the Chicago Startup Summit in August, and is providing ongoing mentorship and business opportunities.

“It’s been an amazing experience to meet (Richard Branson) and work with his team,” Johnson says. “We hope to continue the relationship going forward, and inspire other entrepreneurs to start their company in Detroit. There’s a really good community of entrepreneurs that want to support each other and see each other succeed.”