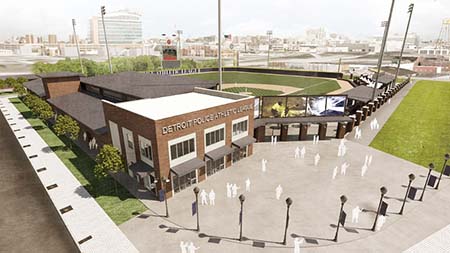 The Detroit Police Athletic League has set a $15.5 million fundraising goal for the “Kids at the Corner” campaign to redevelop the old Tiger Stadium site — located at the corner of Michigan and Trumbull in Corktown — into a new athletic field and headquarters for PAL.

Detroit PAL is a nonprofit organization dedicated to helping children through athletic, academic, and leadership development programs. The organization is launching the fundraising campaign tonight at its annual awards dinner at the Detroit Athletic Club.

The project, announced in December, will include a restored baseball field with a gated entryway, ticket booth, lights, a scoreboard, and seating for 2,500 spectators. The field will follow the exact dimensions of the former field where the Detroit Tigers played from 1912 to 1999 before moving into Comerica Park.

Detroit PAL campaign co-chair, former U.S. Sen. Carl Levin, secured a $3 million federal grant from the Department of Housing and Urban Development for the project in 2009. Numerous groups sought to renovate the stadium, but the original stadium was eventually torn down due to the lack of a financially viable development plan, according to Detroit Economic Development Corp.

In turn, Larson Realty Group in Bloomfield Hills plans to invest $44 million to construct 126 apartments (20 percent of which will be affordable units), 30,000 square feet of ground retail space, and other amenities at the 9.5-acre site. The new development will border the former sidewalks, and will not be built on the former ball field. The project architect is Rossetti in downtown Detroit.

Richey says a crowdfunding effort, to be launched soon, will finance a portion of the project. The goal is to have all of the financing in place by year’s end, with construction to begin next year.