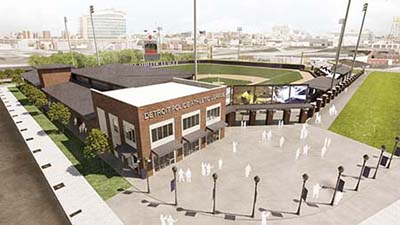 The Detroit Police Athletic League today announced it raised $12 million and will be able to break ground in April on its new youth sports complex and headquarters at the site of the old Tiger Stadium in Detroit’s Corktown neighborhood.

“For many years, the corner of Michigan and Trumbull and Tiger Stadium was where many young athletes began incredible careers enabling them to give back to their communities,” says Detroit Mayor Mike Duggan. “It’s meaningful that this site will honor many of those individuals while becoming the newest complex for more Detroit kids to receive the kind of mentoring and support through sports programming that Detroit PAL provides.”

The “Kids at the Corner” campaign began in February 2015 with a goal to raise $15.5 million after the Detroit Economic Development Corp. approved Detroit PAL’s plans to redevelop the land at the corner of Michigan and Trumbull.

“By April, we will begin construction at the corner of Michigan and Trumbull on a new facility that will bring to life much of the history and many of the memories of this iconic location while also serving as Detroit PAL’s headquarters,” says Tim Richey, CEO of Detroit PAL, a nonprofit organization dedicated to helping children through athletic, academic, and leadership development programs.

“Because we were able to reach these important benchmarks with enthusiastic community support, we will soon set a financial ‘stretch goal’ to incorporate ideas that have been put forth to enhance the original design plans,” says Ron Hall Jr., chairman of the Detroit PAL board of directors.

Richey says contributions beyond the $15 million benchmark would be used to incorporate additional elements at the site.

In January, the Detroit Pistons donated $300,000 to Detroit PAL to create and operate a new recreational basketball league for Detroit children.â€‹