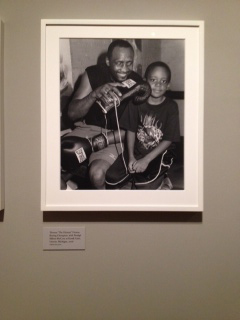 The Detroit Institute of Arts on Friday will open Detroit-Bruce Weber, a photo exhibition that aims to highlight the resilient and vibrant spirit that characterizes Detroit.

On display through Sept. 7, Weber’s exhibit showcases photographs of various Detroit locations and portraits of both everyday and more well-known Detroiters, including singer Aretha Franklin and members of the Detroit Chapter of the Tuskegee Airmen.

“Bruce has a very dynamic photographic style,” said Nancy Barr, the DIA’s curator of photography, at a preview of the exhibit today. “He looks at a hopeful, prideful, and at times, glamorous side of Detroit.”

Weber, whose work first appeared in Vogue in 1978, has been working with Detroit-based subjects since 2006.  He has said that it was the “continued courage and resilience” of the city’s residents that first inspired him to bring his camera to the Detroit.

“If I was ever in trouble, I would want someone from Detroit with their dukes up with mine,” says Weber, adding that he is “thankful for the Lions, Tigers, Pistons, and Red Wings, and the Kronk Gym, which is home to so many great boxers.”

The exhibition is a result of a partnership between the DIA and Condé Nast, the publisher behind magazines such as Vanity Fair and GQ. This afternoon, representatives from both organizations — including Vogue’s Anna Wintour and Gina Sanders, president and CEO of Fairchild Fashion Media — will attend a luncheon for 100 Women for the Arts, an initiative that aims to bring together women in business and community leaders to support the DIA.

The luncheon is expected to raise $240,000 for the DIA’s endowment.

“There is a buzz out there that’s very exciting,” says Barbara Gufca, director of the enterprise development division at Alixpartners in Southfield and co-chair of today’s event. “The exhibits that have come to the DIA in recent years are the result of relationships with people here and the relationships they have in the greater art world.”