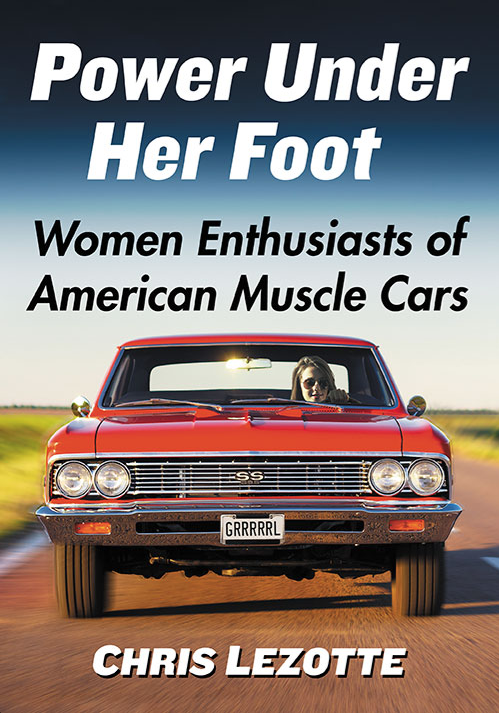 The book highlights women’s admiration and passion for American muscle cars in a society that associates the cars with the male driver. In the 21st century, women have become a growing presence in the muscle car community, exhibiting classic cars at automotive events and driving modern-day Mustangs, Camaros, and Challengers.

“In American culture, we tend to think of the woman driver in a very limited – soccer mom with a minivan – kind of way,” says Lezotte. “In this book, I am attempting to show a very different – and perhaps surprising – aspect of women’s car ownership. As I discovered when collecting these car stories, women love the American muscle car not only for its power and performance, but for the way it makes them feel while driving, for its ability to present a different side of their personalities, and for the experiences and relationships the car makes possible.”

Lezotte gathered experiences of 88 female car enthusiasts for the book, which examines how restoring, driving, and showing classic and modern cars provides a means to challenge longstanding perceptions of women drivers. The book also discusses how muscle car ownership can serve as a source of female identity, well-being, and empowerment.

Lezotte created commercials for Buick and GMC and was a vice president creative group supervisor. After leaving advertising, she completed a master’s degree in women and gender studies at Eastern Michigan University in 2009, and her doctorate degree in American culture studies at Bowling Green State University in 2015.

She was awarded a 2015-2016 Center for Popular Culture Studies Research Fellowship at Bowling Green and has recently been accepted into the National Coalition of Independent Scholars.

The book was published by McFarland and is available on Amazon.com, at BarnesandNoble.com, and through McFarlandpub.com.