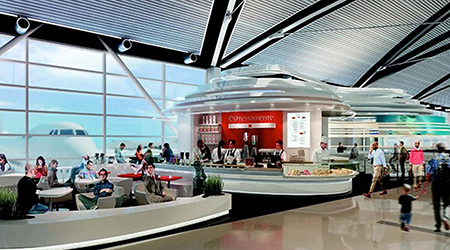 An Illy Coffee and Fountain Bar is set to open Tuesday near Gate A40 at the Detroit Metropolitan Wayne County Airport’s McNamara Terminal, among other new restaurants.

The Italian gourmet coffee and espresso brand is the first of 25 new food and beverage concepts that will open in the airport by the end of 2016 as part of a new program approved earlier this year.

After issuing a request for proposal in September 2013, the airport received 45 offers from nearly 20 companies, representing more than 100 concepts. Among the concessionaries ultimately selected was Illy’s owner, a joint venture between Atlanta-based Hojeij Brand Foods and Detroit-based AP United LLC.

Following the Illy soft opening on Tuesday and grand opening on Wednesday, HBF APU JV will also open this year a P.F. Chang’s, LongHorn Steakhouse, and Gordon Biersch, which pairs gourmet foods with German Lagers, within the airport.

HBF APU JV will also bring into the airport a Bigalora, Chick-fil-A, Potbelly, Bruegger’s Bagels, Pinkberry, and Plum Market serving Zingerman’s. In total, the 10 concessions are expected to generate revenues of approximately $400 million during its initial term of up to 12 years.

IN OTHER RESTAURANT NEWS, Outback Steakhouse will open the doors to its Livonia location, at 13010 Middle Belt Rd., on Wednesday. The restaurant will host a ribbon cutting ceremony at 11 a.m., and on Nov. 17, will donate a portion of its proceeds to the American Cancer Society’s Livonia chapter.