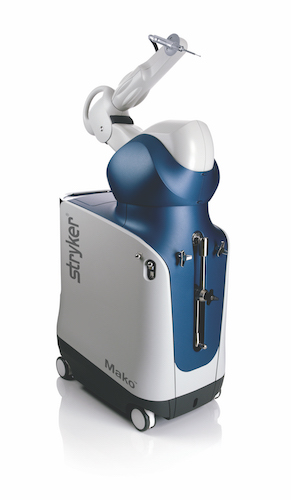 The procedures took place simultaneously at both Harper University Hospital in Detroit and Huron Valley-Sinai hospital in Commerce, and allowed a robotic arm-assisted technology which ensured accurate alignment and placement of knee and hip implants with nearly perfect results.

The DMC has used MAKOplastly technology since 2013 to assist in other minimally invasive hip and knee procedures, and is currently the only hospital system in southeast Michigan to offer this technology. In the past three years, MAKOplasty had been used in more than 1,300 partial knee replacements before being transitioned to the full procedure last week.

“This is important for our growing population of orthopaedic patients because it can improve outcomes,” says Dr. Khaled J. Saleh, executive in chief for DMC orthopedics and sports medicine. “Advancements like these can lead to reduced hospital lengths of stay, reduced hospital readmission rates and other improvements. We have one of the most active robotic orthopedic centers in the nation, with a large team of exceptionally trained surgeons which means we can offer our patients a full continuum of solutions for their knee and hip joint pain issues.”

The DMC currently operates four MAKO systems between the three hospitals in its health system, making it the second largest MAKO system worldwide.