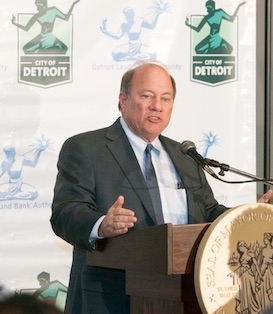 The Affordable Housing Leverage Fund will be comprised of $50 million in grant funds, $150 million in low-interest borrowing, and $50 million in public funds from expected Federal and City funds for affordable housing over the next five years.

“The preservation and creation of affordable housing is the cornerstone of our growth strategy,” says Duggan. “Affordable housing offers stability for the city’s low-income residents and provides options to households at a range of incomes in all neighborhoods. This is what we are talking about when we say that we are building one city for all of us.”

Duggan says preservation — maintaining the affordability of an existing unit over time — is critical to retaining the city’s existing population and ensuring future affordable housing. The targeted affordable units for preservation are at risk because of expiring low-income housing tax credits and deteriorating conditions, especially in neighborhoods that have seen improved market conditions.

The city will also prioritize and target the approximately 3,500 most at-risk units for investment by seeking a preservation community development financial institution (CDFI) that will partner with the city’s Housing and Revitalization Department and create the pipeline of preservation units.â€¨

To build new affordable housing units, the city will continue to expand initiatives that have helped to develop 852 such units since 2015. The Housing and Revitalization Department will work with the Planning and Development Department to identify vacant city-owned parcels and existing buildings for rehab in the designated neighborhood planning areas, as well as preservation targets within those neighborhood planning areas for redevelopment.

In addition, Duggan has charged the Housing and Revitalization Department and city partners like the Detroit Housing Commission with the job of implementing of the plan, starting with the creation of the Office of Policy Development and Implementation.

“We have had a chance to observe and speak with leaders from Washington D.C., Chicago, and San Francisco and learned how they have had to make major investments in affordable housing after the real estate market grew and missed some opportunities to include affordability in their revitalization,” says Arthur Jemison, director of the Housing and Revitalization Department. “With a strategy and fund of this kind, we hope to learn from their efforts and invest in affordable housing now.”â€¨