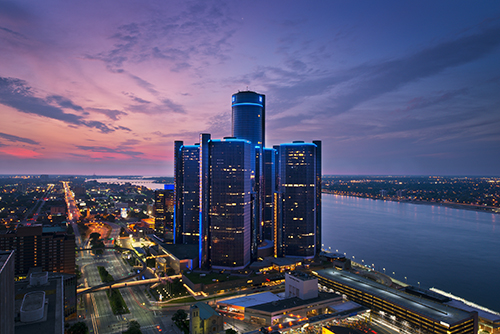 The Detroit Marriott at the Renaissance Center today begins another chapter of its $30 million remodeling project with the renovation of 100,000 square feet of meeting space as well as its two-level concierge lounge. The work will be completed in December.

The renovation of the hotel’s conference space, which spans three floors with 34 separate meeting rooms, will enhance functionality as well as aesthetics, says Shonda Johnson, general manager of the Detroit Marriott. Taking inspiration from the Detroit River and the concrete and glass architectural features of the RenCen, the design team will use gray, taupe, watery blue, moss green, and purple in the updated color palette.

Johnson says textured wall vinyl on large pillars will resemble ripples of water while polished wood paneling will add warmth to the space. The conference areas, where needed, also will be updated with state-of-the-art technology equipment.

The public areas outside the meeting rooms will be redesigned to allow for the addition of pre-function space for small group gatherings, with flexible seating areas and workspaces. A glass light fixture, resembling droplets of water suspended from the ceiling, will serve as the decorative focal point of the new space.

Meanwhile, the concierge lounge — located on the 56th and 57th floors — and available to elite members of Marriott Rewards and those staying in concierge guest rooms, will be redesigned to resemble an automobile showroom. The space will be redecorated with sleek furnishings, contemporary seating, polished surfaces, burled walnut and silver mesh, and artwork featuring actual car parts.

“We’re very excited to begin this next big step of a $30 million renovation that is an investment in the city of Detroit,” Johnson says.

Overall, renovation of the Detroit Marriott’s 1,329 guest rooms began last February and will be completed in October, followed by 52 suites in December. The hotel has remained open throughout the project, with a few floors undergoing reconstruction at a time.