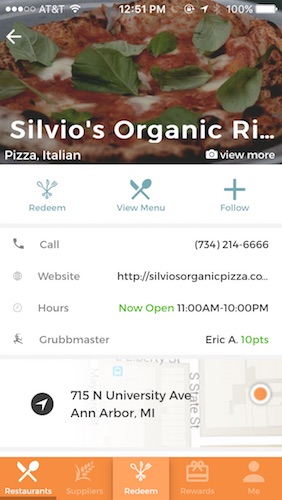 Detroit-based Grubbable, an app that connects customers with locally sourced restaurants, has expanded into Ann Arbor and Ypsilanti with a combined 35 restaurant partnerships between the two cities.

“We’ve listened to the wants and needs of the people we’ve been interacting with in the community, and we’ve also been trying to pay attention to what the restaurants deserved and were wanting and needing,” says Candice Pritz, manager of marketing, relationships, and community engagement at Grubbable.

Since launching last year, the Grubbable app has been updated to include a rewards program feature, which allows users to earn points for checking in at restaurants and referring friends to the app.

“(The feature) builds camaraderie and loyalty to the restaurant so it’s kind of a win-win,” Pritz says.

The app is also launching the Grubbable for Business sector, which partners with Detroit-based companies to offer its services as an addition to existing health and wellness packages.

“We aren’t just a phone app,” Pritz says. “That’s our service, yes, and that’s the tool that we’re using, but really we’re trying to build a community.”

She says the app also will be expanded throughout the Midwest. The company has started building a restaurant network in Chicago, with plans to create partnerships in Cleveland and Columbus, Ohio.

The app, which was previously offered for $4 a month or an annual fee of $40 per year, is now available for no cost for the first month of use, and 99 cents per month after that.

Grubbable is available to download for both iPhone and Android devices.