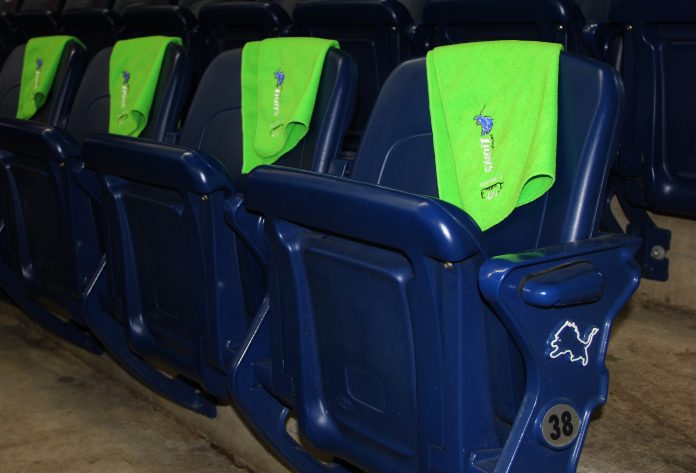 Fans attending the Detroit Lions game against the Tampa Bay Buccaneers on Sunday will receive a towel made from three plastic bottles as part of the team’s season-long recycling efforts and participation in the first-ever #TurnItGreen week.

“Recycling is critical, yet 70 percent of plastic bottles in the U.S. do not get recycled and end up in parks, landfills, and our oceans,” says Lions quarterback Matthew Stafford. “This season, our fans have stepped up to the challenge and made the smart throw by tossing their used plastic bottles into recycling bins, helping us reach our goal, and ultimately keeping plastic bottles out of landfills.”

Since launching their recycling efforts earlier this year with Unifi’s recycled fiber brand, Repreve, the Lions and their fans have recycled nearly 60,000 bottles to date. At the end of the season, Repreve and the Lions will donate products made from Repreve’s plastic-based yarn to the Detroit Lions Academy on the city’s west side.

“Our intention with this collaboration is not only to educate fans on the importance of recycling and increase in-stadium recycling efforts, but also expand recycling efforts in the NFL fan community, and we feel that we have started to make this happen,” says Roger Berrier, president and COO of Unifi.

The game is part of the brand’s nationwide #TurnItGreen campaign to raise recycling awareness, and will use nearly 200,000 bottles to highlight the various products that can be made from recycled plastic, Berrier says.

On Sunday, members of the Lions organization and broadcast team will be wearing Repreve-based neckties, each made from one recycled plastic bottle. There will also be a bottle throwing competition between Stafford and the winner of the “Make The Smart Throw” contest, which challenges fans to submit trick-shot videos of themselves throwing plastic bottles into recycling bins.

Repreve — made from recycled materials, including plastic bottles — has been used in products by brands including The North Face, Patagonia, Ford, and Haggar, Berrier says.