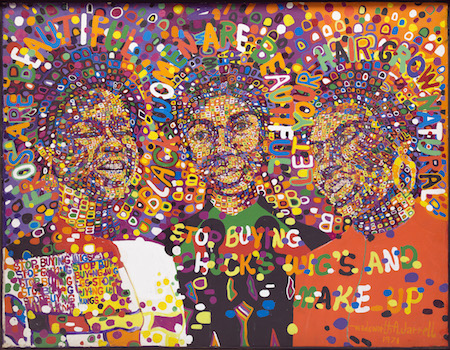 As part of a city-wide commemoration of the 50th anniversary of the 1967 Detroit rebellion, the Detroit Institute of Arts (DIA) will present “Art of Rebellion: Black Art of the Civil Rights Movement,” from July 23-Oct.22. The exhibition is co-organized by the DIA and Detroit’s Charles H. Wright Museum of African American History, which is hosting a complementary exhibition, “Say it Loud: Art, History, Rebellion.”

Both installations are part of a reflection on the Detroit rebellion, which is led by the Detroit Historical Museum and includes more than 100 local institutions. “Art of Rebellion” features 34 paintings, sculptures, and photographs primarily by African American artists working both collaboratively and independently in the 1960s and 70s.

Artists in the collectives created art for African American audiences that asserted black identity and racial justice. The exhibition also includes works by artists who were not part of a collective, and artists working in later decades who were inspired by art from the Civil Rights Movement. A scholarly catalog accompanies the exhibition.

“The commemoration of the 1967 Detroit rebellion provides an opportunity to call attention to the talented and often overlooked artists who were reacting to the struggle for social, political, and racial justice during the 1960s and 70s,” says Salvador Salort-Pons, DIA director. “The DIA’s collaboration with the Wright Museum lays a foundation from which we are building a strategic and lasting working relationship that will help bring our community closer together.”

Most of the exhibition focuses on the art of five artist collectives, including New York-based groups: Spiral Active, Kamoinge Workshop, Weusi, and Black Arts Movement, as well as Chicago-based AfriCOBRA.

“Art of Rebellion” also features the work of artists outside the collective, but were also reacting to social justice and civil rights issues. Some examples are “Black Attack” by Allie McGhee (1967), which is about Detroit’s 1967 rebellion and “Selma to Montgomery, Alabama March, Cover of May, 1965 Issue of Ebony Magazine” by photographer Moneta Sleet Jr., which shows Dr. Martin Luther King Jr. leading protesters on the famous march in the title of the work.

The exhibition is included with museum admission, which is free for residents of Wayne, Oakland, and Macomb counties. More information can be found here.