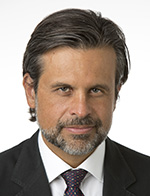 The Detroit Institute of Arts board of directors today named Salvador Salort-Pons as its new director, president, and CEO. Previously, Salort-Pons was the museum’s executive director of collection strategies and information and director of its European art department. He succeeds Graham W. J. Beal, who retired as director of the DIA in June.

“(Salort-Pons)’s scholarship, extensive knowledge of the DIA, his international experience, and his management skills make him the ideal choice to lead the DIA in the coming years,” says Gene Gargaro, chair of the DIA board and chair of the search committee. “His success in overseeing one of the most important European art collections in the country was among the many factors that made (Salort-Pons) such an appealing candidate to the search committee.”

Salort-Pons, has served as director of the museum’s European art department since 2011, adding the role of director of collection strategies and information in 2013. He also serves as the DIA’s curator of European paintings and has played a key role in the museum’s strategic planning process.

“After all these years working at the DIA, I feel deeply connected to Detroit especially through the role the museum has played as part of the city’s extraordinary history,” Salort-Pons says. “I look forward to working with our staff, our patrons, our partners in the three-county art authorities and throughout Michigan. I truly believe our greatest years lie ahead of us.”

Gargaro says the decision was made after a nine-month international search process.

“The DIA’s international stature and the exciting post-bankruptcy environment here in Detroit generated significant interest from many well-qualified candidates who expressed a high degree of interest in the position,” Gargaro says. “That we found the right candidate from within our own ranks speaks very positively to the depth of talent we have at our museum.”

Salort-Pons has organized the exhibitions Fakes, Forgeries and Mysteries, Five Spanish Masterpieces, and was the in-house curator for the show Rembrandt and the Face of Jesus, among others. Prior to coming to Detroit, Salort-Pons was senior curator at the Meadows Museum at Southern Methodist University in Dallas, an assistant professor at the University of Madrid, and an exhibition curator at the Memmo Foundation/Palazzo Ruspoli in Rome.