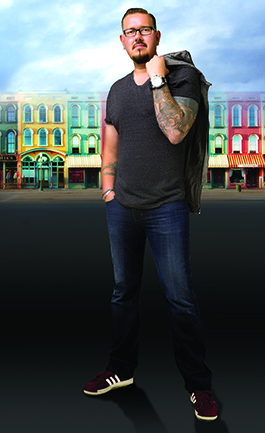 Three episodes into its premiere season, Start Up on PBS, filmed by a Detroit-based director and producer, has highlighted entrepreneurs that run the gamut from a zombie-themed retail store in Pittsburgh to a pizza tour business in Chicago — just two of the 43 businesses that have been filmed and interviewed so far.

“The number one pattern I’ve seen through all of these businesses is (they put) passion before profit,” says the show’s creator and host Gary Bredow, an entrepreneur, documentary filmmaker, and managing director of Big Bang Detroit. “They all had something that was keeping them awake at night. For the successful ones, at least, it started with that passion.”

Distributed to more than 350 public television stations nationwide, the series aims to show how some of today’s small business owners have established themselves in today’s economic landscape. According to the U.S. Small Business Administration, seven out of 10 new employer firms last two years, 50 percent last five years, and 25 percent last 15 years or longer. The show shares the lessons of those who have succeeded.

The 13-episode series introduces viewers to small business owners throughout the U.S., with stops in Detroit, Chicago, Cleveland, Indianapolis, Milwaukee, New York, Pittsburgh, and Washington, D.C. Among the Michigan entrepreneurs featured in the first season are Jake Sigal, founder of Ferndale-based Livio (which was acquired by Ford last week); Bob, Joe, Jennifer, and Mike McClure of McClure’s Pickles in Detroit; and Tawny Thieu of Pink Pump in downtown Royal Oak, P2, and P2 Exchange retail stores.

“The thing about Michigan, especially the Detroit area, is that we took such a hard hit that a lot of people were forced to do things on their own,” Bredow says. “There’s no shortage of entrepreneurs here. We could do 15 seasons on Michigan alone.”

For now, however, the show has been slated for three seasons, and Bredow says the next series will visit a selection of new cities. He’s quick to add, however, that he might have to “squeeze a few other Detroit businesses in there.”

If viewers take away one thing from Start Up, Bredow hopes they recognize that they’re no different from the people he interviews. “These are normal, everyday people,” Bredow says. “(They don’t) have any more education than you. They didn’t have better credit. They didn’t have more money in the bank. The only difference is that (you’re) sitting on the couch watching them, and they’re doing it.”

Each show features a well-known business leader who provides insight into the triumphs and pitfalls of entrepreneurship. Among those featured in the first season of the series are Angie Hicks, co-founder and chief marketing officer of Angie’s List, and Daymond John, founder and CEO of FUBU.

Bredow says Start Up is a sociology experiment traveling across the country. “It’s a snapshot of what’s happening in America right now, at the ground level.”

For Detroit residents, Start Up airs at 7:30 p.m. every Monday on the Detroit Public TV PBS Station. It is also available at startup-usa.com.