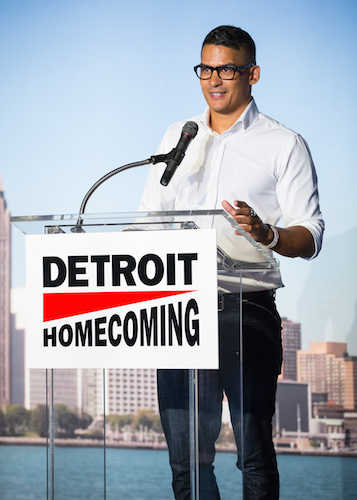 To kick off this year’s Detroit Homecoming, an event that brings successful “expats” back to Detroit, Shawn Ward, CEO of New York City-based Ward and Fifth Consulting, today announced he has opened a branch of his agency in Detroit’s Eastern Market. He will also launch Williamson Goods, a luxury sporting equipment manufacturer, in September.

The firm has also started the Urban Future Program – Detroit, which will give Detroit companies 75 percent off business development services.

Crafted from raw materials by Detroit citizens, Williamson Goods’ products will be developed and produced in-house and include a luxury bicycle in a variety of colors, and a football made from exotic skins and handcrafted to adhere to the official size and weight of an NFL ball.

A portion of the proceeds of every product sold by Williamson Goods will be donated to the Detroit Police Athletic League.

“When we decided to build Williamson, our hearts took us to Detroit,” Ward says. “We want to show that the heart, passion, and grit of Detroit can create some of the most luxurious products in the world.”

Detroit Homecoming 2016 will take place Sept. 14-16. Expected attendees include: Steve Ballmer, former Microsoft CEO and current owner of the Los Angeles Clippers; Tony Fadell, one of the creators of the iPod and founder of Nest Labs, and Jeffrey Seller, producer of Broadway’s Hamilton.

“We want creative young people like Shawn Ward back in Detroit,” says Mayor Mike Duggan. “The talent pipeline is shifting in Detroit’s favor.”

Since the inaugural Detroit Homecoming event in 2014, Detroit expats have committed to investing more than $260 million in city projects and businesses.