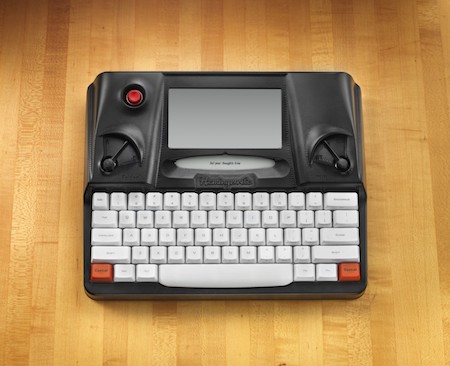 While today’s technology companies often share a similar goal of jamming as many capabilities and applications into the smallest package possible, Detroit-based Hemingwrite, set to begin production next year, will take a different approach.

“If you sit down for two hours (with the Hemingwrite), you’re going to make two hours of progress writing,” says Patrick Paul, a software developer who developed the concept with mechanical designer Adam Leeb. “You can’t say the same thing for when you sit down at any other laptop or computer because it’s too easy to be interrupted.”

The concept is relatively straightforward: Put basic word processing technology within the body of a typewriter — there’s no email, no Internet, no apps.

The machine automatically saves data, and, when connected to Wi-Fi, syncs documents to the online web app Postbox, which can be integrated with cloud services including Dropbox, Google Docs, Evernote, iCloud, OneDrive, ownCloud, and SpiderOak.

Users can work on three documents at a time (the Hemingwrite can save up to at least 1 million pages) and brings writers exactly to where they last left off during their most recent session. While page up and page down buttons allow users to review previous work, the machine doesn’t allow copy and paste functions — after all, the machine is dedicated to writing, not editing.

“Originally, our niche was creative writing, but the reality is so many people now do at least some writing, even if it’s just a blog post, that there’s been a lot of broad interest,” says Paul, noting that the product has received quite a bit of interest from screen play writers.

The Hemingwrite features a daylight readable, high contrast screen; a battery that lasts up to four to six weeks with regular use; and keyboard language support for English, German, Italian, Portuguese, Spanish, French, and Turkish.

Paul and Leeb, co-founder of GridPar and founder of Sun Daily Health, respectively, say they will implement additional language options if they reach their goal of $300,000 on Kickstarter. Considering they surpassed their initial goal of $250,000 within the matter of 34 hours, it’s likely that will happen.

The business duo — who first met in the Bizdom accelerator in Detroit — first began attracting attention from national media outlets following their participation as one of 10 semifinalists in the Insert Coin Engadet competition in November, Paul says. “We didn’t win, but we got a significant amount of exposure. By the time we launched our Kickstarter, we already had 15,000 people on our mailing list.”

The writing tool will retail for $499 next year, although discounted prices are available to early backers through their Kickstarter, which runs through Jan. 23.