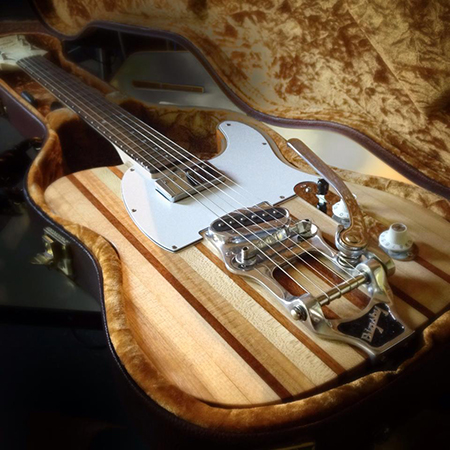 Wallace Detroit Guitars  this month will begin selling its lineup of electric guitars — made from reclaimed wood found in Detroit’s vacant houses and properties, says the company’s owner, Mark Wallace.

Thus far, Wallace says the company, which operates in several locations, has produced about 10 prototypes, each of which has passed through the hands of about eight different specialists over a period of six weeks and, on average, costs just under $2,000.

“Ideally, it would be great to bring the whole operation under one roof, but for now, we’ve be able to perfect the prototype phase and really refine the product with everyone working in different locations,” says Wallace, noting that he heads the operation from his home in Corktown. “It’s also nice to have so many people touch each instrument as they go through the production process — it expands the reach of the guitar and gives people a sense of pride and ownership in the instruments as they’re produced.”

“Primarily, I try to focus on pine species,” Wallace says. “And what’s cool about the wood (from Detroit’s older homes) is it’s all about 100 years old, maybe older than that in some cases. It was harvested from what are called old growth forests, so the wood is much older and much more dense in its grain pattern because it wasn’t grown as fast as modern lumber is grown. It’s pretty special stuff.”

But Wallace says sound is the defining factor for a guitar to be great. “People get excited about the idea (of how the guitar is produced) and the way the instrument looks, but they go nuts for how great the guitars sound. The tone is great, and part of that is because we’re using incredibly high-end electronics, hand-wound pickups, and custom wiring.”

To illustrate the versatility and quality of the product, the company’s website, which will launch this month, will include video and audio clips of different musicians — representing genres including jazz, blues, rock, and metal — playing the guitars. However, Wallace notes that some things are better experienced in person.

“We’re in talks with retailers,” Wallace says. “Nothing is final yet, but a guitar is something you want to be able to play before you buy it. We would love to find some thoughtful locations that could carry the instruments so people can see and play them in person.”

Looking forward, Wallace says he will have business manager handling day-to-day operations so he can focus on his role as president and CEO of the Detroit RiverFront Conservancy.

“I intend to maintain creative control and to make sure the company maintains its integrity in terms of quality, communicating with customers, and staying true to its mission,” Wallace says. “But if the instruments are accepted by the market the way I expect them to be, I’ll certainly need quite a few people helping me out.”