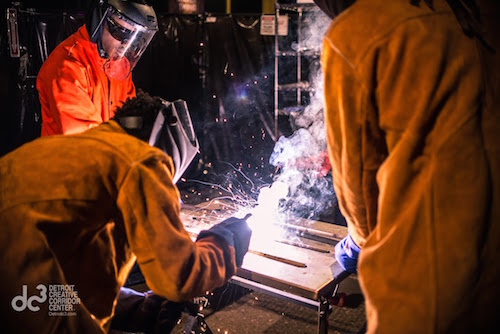 Detroit Creative Corridor Center, an organization that provides resources to elevate the economic and social impact of the city’s creative economy, is launching a 10-year initiative that will focus on building public awareness and a common vision for Detroit design professionals.

The Detroit City of Design initiative comes on the heels of the recent designation of Detroit as the first and only recognized United Nations Educational, Scientific, and Cultural Organization City of Design in the United States — a classification that acknowledges a city’s design heritage and commitment to an expanding creative sector.

“Business Leaders for Michigan has long seen the opportunity that exists for the creative sector industries to be an important driver in Detroit’s future,” says Sabrina Keeley, COO of the organization and governing council member of the Detroit Creative Corridor Center in Midtown. “Receiving the UNESCO City of Design designation is an international recognition of Detroit’s promise in this area and provides an opportunity for the city’s stakeholders to work cohesively toward some tangible goals.”

The initiative will kick off on June 28 at the Museum of Contemporary Art – Detroit, 4454 Woodward Ave., and will feature Ralph Gilles, head of global design at FCA; Maurice Cox, Detroit’s planning director; and Katy Locker, program director for Detroit at the John S. and James L. Knight Foundation

The event will detail plans to build Detroit City of Design, recognize early supporters, and offer specific opportunities for corporate and civic involvement in the initiative.

“We are honored that Detroit has received this international recognition for its rich design heritage and commitment to the creative sector around the globe,” says Rick Rogers, president of the College for Creative Studies and a Detroit Creative Corridor Center governing council member. “We hope to inspire our community to begin to think about the impact that Detroit City of Design can have in creating jobs, improving place, and strengthening culture over the next 10 years.”

The center is also releasing an engagement toolkit to help businesses, nonprofit, and philanthropic organizations build awareness of the UNESCO designation and the Detroit City of Design initiative.

The toolkit will consist of resources such as fact sheets, engagement tips, collateral material, visual assets, and brand guidelines.