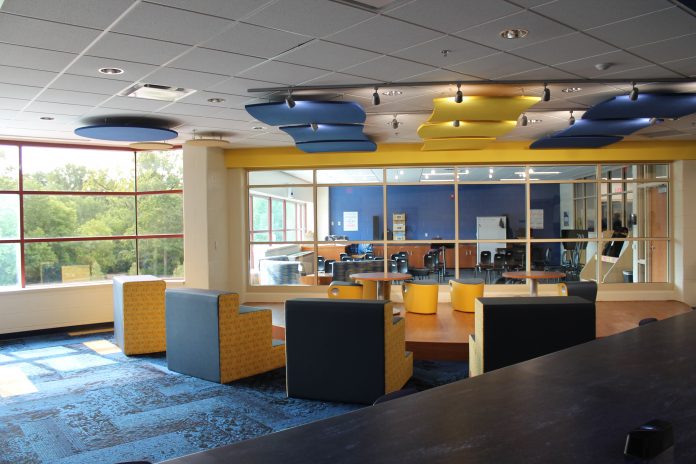 The Detroit Country Day School in Beverly Hills today celebrated the completion of a $14-million renovation to the existing middle school on Hillview Lane. The project wraps up phase one of a $33-million update of the middle and lower schools.

The expansion, which started in fall 2017, features enhanced spaces and technology and incorporates fifth-grade students into the campus. There are two grade-level learning centers – one for grades five and six, and one for grades seven and eight. The renovation includes STEAM spaces for project-based learning, an instrumental music room, engaging café spaces, secure outdoor play areas, renovated science labs, and collaboration spaces for interactive programs such as LEGO League, robotics, and Science Olympiad.

“Today marks a truly momentous occasion for the entire DCDS community. The work we are doing through the VIVID Capital Campaign builds upon our history and sets up an extraordinary framework for future generations of students,” says Glen Shilling, headmaster of DCDS. “We have put enormous care into weaving the programming, learning, and curriculum needs of 21st century students into every facet of our new facilities. The middle school we are unveiling today will be a testament to modern educational philosophies. Once complete, the VIVID project will provide the single most extraordinary educational experience in Michigan.”

The middle school was built in 1991, and its classrooms and common spaces were last updated in 2015.

Phase two of the project is the $18-million renovation and expansion of the lower school. It will break ground on Wednesday, Oct. 10 and is expected to be completed in 2019. Plans include a single campus for pre-K through fourth-grade students and feature expanded classrooms, art and music spaces, a gym, secured entry areas, and a makerspace for project-based learning.

Additional project highlights include a $1 million film studio addition to the upper school.