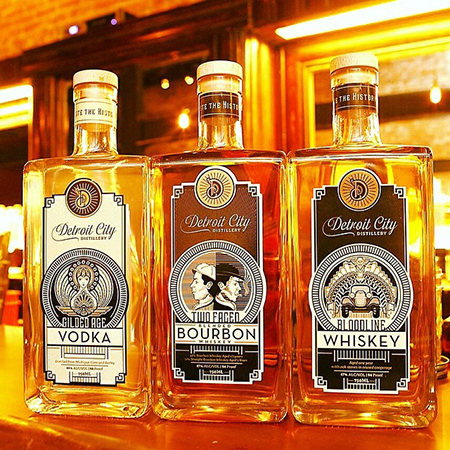 The Detroit City Distillery — a craft distillery with a focus on using locally produced ingredients — is set to open its doors Friday in Eastern Market, where it will provide an ‘alternative’ tasting experience.

“When you travel around the country, it seems there are a lot of (distillery) tasting rooms where all you can do is get a taste of the spirit and then buy one of the bottles for sale,” says Chuck Gellasch, the distillery’s bar manager. “We wanted to have a relaxed atmosphere where you could get more of an upgraded cocktail experience.”

A former bar manager at Sugar House in Corktown, Gellasch says he wants to bring that style of cocktail experience to the tasting room at Detroit City Distillery.

Ranging in price from $7 to $12, the cocktails will feature Detroit City’s three available liquors — Bloodline Whiskey, Two-Faced Bourbon, and Gilded Age Vodka — via both the classics, including Manhattans and Gimlets, as well as some originals. The Wallace Thurman, for example, is made with vodka, blackberry, lemon, and soda, while the Detroit Sidecar features whiskey, orange cordial, and lemon juice.

Gellasch says the facility doesn’t have a kitchen, so customers shouldn’t expect restaurant-style food, although small plates will eventually be added to the lineup. “We’d like to do charcuteries, cheese, smoked fish, pickled vegetables, and then maybe a couple of desserts,” he says.

As for ambiance, Gellasch describes the renovation of a former slaughterhouse. “We’ve got concrete floors, old brick walls, and the ceiling is just kind of naked beams with all of the electrical conduit exposed. It’s a real raw space. We didn’t want to overdo it.”

He adds that the bar that was installed in the tasting room was built around 1935, and found in a vacant storefront in downtown Detroit. “We didn’t want to take away from the character, so we didn’t renovate it or refinish it. We just cleaned it.”

While the cocktail menu currently lacks gin-based drinks, Gellasch says a Railroad Gin will be released soon. Like the bourbon, vodka, and whiskey, the gin will be made using local ingredients.

“We buy organic corn for our bourbon within a 60 minute drive of the market and we can walk out our front door to get everything we need to make you the freshest cocktail possible,” says John Paul Jerome, co-partner and distiller.

Regular fall hours will be 4 p.m. to 2 a.m. Wednesday through Friday; 8 a.m. to 2 a.m. Saturday; and during Detroit Lion’s home games Sunday.

Regarding the early Saturday hours, Gellasch clarifies. “We’re right in the middle of Eastern Market. We’ve got a lot of people that are there early in the morning, and Vivio’s always has a huge line of people waiting to get in for a Bloody Mary. We’re serving those as well, so we figured we might as well be open and give people another place to check out.”