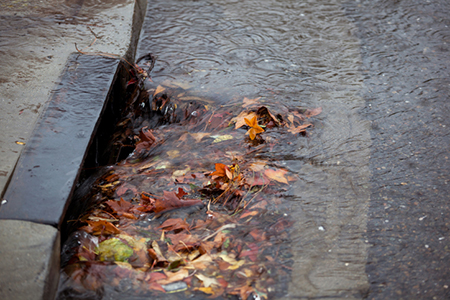 Acceptable stromwater management projects include retention basins and ponds, cisterns, bioretention gardens, bioswales, and pervious pavement. The ordinance applies to any project that will displace at least one-half acre of natural land with a hard surface or replace existing hard surface, such as a building or parking lot.

The ordinance has been in development since 2015 following a regulatory permit requirement established in 2013. Work on it began after the Detroit area experienced a massive rain event that overwhelmed the city’s combined sewer system, causing 60,000 basements to flood. The Detroit Water and Sewerage Department (DWSD) created the ordinance.

The Detroit Board of Water Commissioners approved the ordinance and fee structure in August. City council’s approval was the final step to put the ordinance into effect.

“Like other communities across our state and nation, especially those with a combined sewer system, we need to manage our stormwater where it falls,” says Palencia Mobley, deputy director and chief engineer for DWSD. “Because of our land mass and nearby waterways, Detroit has a unique opportunity to partner with public and private developers to become the greenest city in America.

Historical development activities in Detroit have not been subject to stormwater management requirements. The lack of a consistent, proactive approach to managing stormwater runoff has contributed to overflows of untreated sewage entering the Detroit and Rouge rivers, as well as localized flooding.

The ordinance is in response to DWSD’s National Pollutant Discharge Elimination System and MS4 permit obligations to develop stormwater control requirements for areas of new development or redevelopment. It also will increase the infiltration of runoff into groundwater systems to replicate natural conditions.

DWSD’s leadership in stormwater management includes 16 green infrastructure projects that manage 118 acres and 61 million gallons of stormwater annually. It will invest an additional $50 million in green stormwater infrastructure by 2029 per the regulatory permit.

The fee schedule for the ordinance was approved by the Board of Water Commissioners in August. The review and inspection fee is $2,550. Additional reviews are $400 and additional inspections are $750. A certificate of occupancy will not be issued by the City of Detroit Buildings, Safety Engineering, and Environmental Department if the property owner or developer does not meet the ordinance requirement.

DWSD has issued a Stormwater Management Design Manual as a technical resource for developers and property owners that includes stormwater management site design guidance to meet the ordinance. The manual enables city departments to maintain uniformity of standards while offering developers the opportunity to choose stormwater controls appropriate for their project. The manual is available here.

DWSD serves more than 230,000 residential, commercial, and nonprofit accounts that includes a residential population of 680,000. Its network consists of more than 2,700 miles of water main and nearly 3,000 miles of sewer collection piping in Detroit.