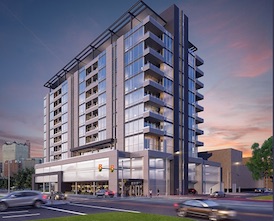 The Detroit City Council today approved brownfield credits for The Ashton, a $58 million, 14-story luxury condominium development complex to be constructed on the west end of downtown Detroit. Located adjacent to WDIV TV-4, The Ashton will feature 103 units.

Once the project is complete, it will be first free-standing high rise built in Detroit in more than 20 years. The project will be developed by 600 Ventures Development Group, a partnership between Eric Means and Brian Holdwick.

“I am grateful to the Council for their decision,” says Means, CEO of Means Group, a Detroit-based development, construction and facility management firm. “This is a huge win for the city. To set the stage for continued growth the city needs home ownership and this project brings a high-quality residential product that people want to own.”

Means adds that based on costs-to-build, projects like The Ashton have not previously been effective. Brownfield credits are used to help incentivize developers to invest in vacant buildings and areas. They are allocated to projects that require significant land remediation, infrastructure improvements, and demolition.

The Ashton will include high-end finishes, a pool, fitness center, ground-floor retail space, and a parking structure. Units range from 700-2,500 square feet and floor to ceiling windows offer views of the Detroit River and city skyline.

The Means Group also broke ground on the historic Metropolitan Building, which is being developed into an extended stay hotel concept. The firm’s other projects include Detroit’s newest Flagstar Bank, the Great Lakes Coffee Co., and the four-phased Woodward Garden Block.

The residence is expected to be completed by mid-2019 and is now accepting reservations. More information can be found here.