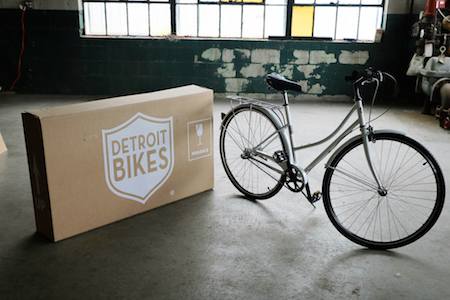 Detroit Bikes will open a flagship store this spring at The Albert in Detroit's Capitol Park. The international bike company, which has a manufacturing factory on the city's west side, is the first retail tenant to sign on for the recently renovated building.

"It's only fitting that a homegrown Detroit company becomes the first retailer to join Capitol Park's transformation," says Richard Broder, CEO of Broder & Sachse, the Birmingham-based real estate firm that manages the property. "Many of our residents are part of the city's growing bike culture, so this addition is a perfect fit."

Founded in 2012 by Zak Pashak, Detroit Bikes specializes in minimalist cycles made for commuters and recreational cyclists alike. Today, the company employs 16 people and produces 50 bikes per week, which are sold by retailers throughout the U.S., Canada and Switzerland and online at detroitbikes.com.

"Like other urban commuters, Detroit residents are looking for different ways of getting around," Pashak says. "You're seeing a lot of new bike lanes and traffic designs that support alternative transportation. Our bikes are designed to be simple and durable, encouraging more people to cycle for fun or as their primary transportation."

The Albert was originally designed in the 1920s by architect Albert Kahn. Today, it features 127 luxury apartment units above street level retail spaces ranging from 800 to 4,500 square feet.

Broder & Sachse plans to announce other retail tenants at The Albert in the coming months. The real estate company expects a total of seven retail tenants, Broder says.