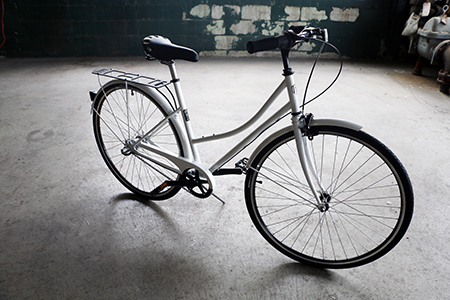 Detroit Bikes is one step closer to reaching its goal of producing 50,000 bikes per year, doubling the total amount of bikes manufactured in the United States, with the release of its new B-Type model.

Featuring a step-through frame and glossy white finish, the B-Type brings a second model to the company’s lineup, joining a matte black commuter model with an A-frame called the Aâ€Type.

“Detroit Bikes vision is to inspire people of all riding abilities to choose biking as a mode of transportation,” says Zak Pashak, founder and president of Detroit Bikes. “Adding the Bâ€Type to our product line is a big step toward influencing that.”

A large majority of Aâ€Type and Bâ€Type parts are manufactured at Detroit Bikes’ factory on the city’s west side. A startâ€up investment of $2 million in 2012 largely supported the procurement of machinery, including a wheel machine with the capability of making one wheel every four minutes.

“Our factory is running smoothly, our team is sound, and our product line is diverse,” Pashak says. “We’re ready to see cyclists taking to the streets from Detroit to Tokyo on a Detroit Bike.”

Both bikes — which feature three simple gears, a chain guard to protect clothing, a rack that can hold up to 35 pounds, and fixed wheels to reduce theft — retail for $699 at stores nationwide and at DetroitBikes.com.