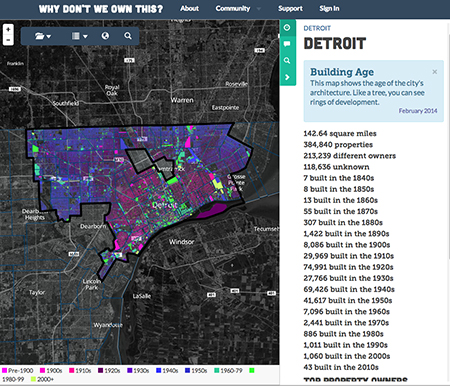 Loveland Technologies, a Detroit- and San Francisco-based social web mapping company, has completed a financing round that will assist the 10-person team in working toward its mission of making public information about every property in the U.S. available to the public and at no cost.

“We want to roll out the red carpet across the entire country, which is a really ambitious goal,” says Jerry Paffendorf, CEO of Loveland. “We don’t have customers in every city, but we hope we can generate more business once people see we put their part of the country on the map.”

Paffendorf is referring to the company’s services such as the online platform, Why Don’t We Own This, which started in 2011 to track the Wayne County Foreclosure Auction and now provides information about ownership zoning and tax assessments for properties throughout the United States.

At the same time, Loveland isn’t without a client base. The company often works with municipalities, neighborhood development groups, and real estate developers looking on foreclosure prevention and development opportunities using a private platform that allows users to view and contribute data as well as create and selectively share maps.

Earlier this year the company teamed up with Motor City Mapping to develop the Blexting mobile app, which cataloged the condition and location of every piece of property in the city of Detroit with the hope of removing abandoned houses and salvaging lots as a highly-visible step toward a broader recovery.

It’s that business model — being a for-profit with a mission-driven goal — that makes Loveland so selective about its investors, Paffendorf says. “We’ve been very cautious about raising money because we worry that if we took money from the wrong person that we could be pressured to not provide some of our resources, which is counter to our mission.”

He points, for instance, to the Social Venture Fund, a student-led fund through the University of Michigan’s Stephen M. Ross School of Business and its Zell Lurie Institute, which was among the investors in the company’s most recent Series AA financing round. “There are groups like the Social Venture Fund that recognize there are still ways to make money while staying to true to a mission of working with people who don’t always have enough funds to pay (for services like this). Having their support has been very validating for us.”

Perry Teicher, a MBA student that helped source the deal, says Loveland first caught the seven-student team’s attention due to the positive impact the company’s services were having on Detroit.

“But what made the company a viable investment for the Social Venture Fund was the implications its technology could have beyond Detroit,” Teicher says. “The student team took the lead on analyzing how Loveland’s tools and services could be applied to future cities and what the long-term impact of that work may be.”

While Loveland’s website currently lists job openings in New York City and New Orleans, where the company expands next depends on how heavy the interest level is in other parts of the country, Paffendorf says.

“Things are moving fast,” he says. “We’ve been getting calls from all over.”

Financial terms of the funding round were not disclosed.