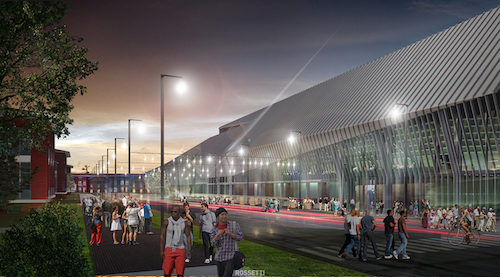 Detroit-based architectural design firm Rossetti has unveiled the concept for its latest project, a sports and entertainment arena in Washington D.C., which will serve as the first facility solely dedicated to the Women’s National Basketball Association.

The development is a joint venture between Rossetti and Washington, D.C.-based company Marshall Moya Design. Operating under Events DC, the official convention authority for the city, the 4,200-seat arena will serve as a professional basketball arena, as well as a space for entertainment and community programming. Construction is set to begin in 2017, with completion in fall 2018.

The building, located on St. Elizabeth’s Hospital’s east campus, will feature two basketball courts, training centers, lounges, and a kitchen. Along with WNBA teams, the Washington Wizards, of the NBA, will use space in the building to practice. Other activities in the stadium will include boxing and e-sports.

“The most exciting aspects of this project are also the most challenging for the design team,” says Tony Reiner, design lead for Rossetti. “We had to be very strategic in order to design welcoming spaces for the community, while integrating the private spaces that professional basketball players require.”

For entertainment, he says the company has created a multi-functional balance through a split-bowl design for non-game events, such as concerts, which will allow seats to be in closer proximity to the stage.

The concourse and lobby areas are designed for community events, such as art shows, local food production, and gallery space. The facility will also include exterior facing retail tenant bays, allowing stores to stay open when the arena is closed.

The sloping landscape for the site allows the bowl to sink into the ground and rest on grade, which will reduce costs and the scale of the building. The building will also have a gateway that connects the arena to St. Elizabeth’s main campus.

Founded in 1969, Rossetti specializes in designing sports, entertainment, hospitality, and commercial properties. The 85-person firm designed The Palace of Auburn Hills, the Greektown Casino and Hotel, and was part of the design team for Ford Field.