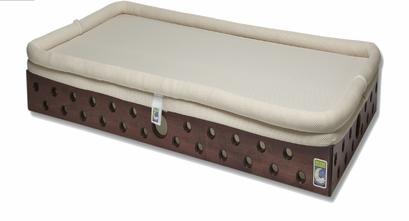 Detroit-based Secure Beginnings, a manufacturer of breathable crib mattresses, has advanced to the next round of consideration to ultimately appear on ABC’s Shark Tank, and has tripled its sales in the past few months.

“(After) the success we’ve had, we feel we got that exposure before any decision from the show has been made,” says Julie Andreae, co-founder of Secure Beginnings.

Launched in 2010, the company produces crib mattresses that allows an infant who is face down to breathe normally through an air permeable mattress. Andreae says the mattress prevents babies from rebreathing carbon dioxide, which she says is one of the leading causes of sudden infant death syndrome.

In May, Shark Tank, a reality show where entrepreneurs pitch their startups to investors, came to Detroit looking for entrepreneurs to showcase in its upcoming season. Secure Beginnings advanced to the next round, and were asked to create a video to showcase their product line. The company partnered with Troy-based Media Genesis to produce the videos, which helped draw 12,000 new Facebook page likes, along with close to 150,000 thousands video “shares” in a 30-day period. Andreae credits the videos for helping the company triple its sales.

Secure Beginnings sells three different types of crib mattresses, which retail from around $300 to $420. The mattresses are sold at Babies R Us, Amazon, RightStart, as well as on SecureBeginnings.com. â€‹