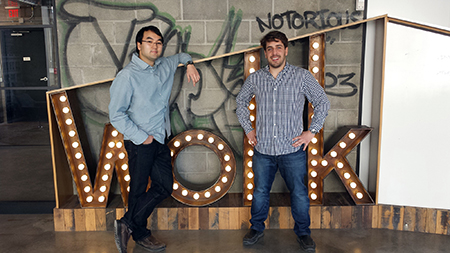 “We did a little research and realized there wasn’t anyone really tapping into that market,” says Steven Mazur, one of the co-founders of the company. It was really the biggest part of the fashion industry that wasn’t being addressed. We decided we wanted to be the ones to go and make that.”

Mazur, from Sterling Heights, along with Eric Huang of Washington, D.C., launched their idea on Indiegogo, a crowd-funding platform. They are currently accepting pre-orders for casual button-down shirts.

Mazur says these shirts are tailored differently than button-downs found at clothing and department stores. “Even shirts that are a smaller size end up having a body length and a sleeve length that are a little bit too long. The general proportions just don’t really work too well,” Mazur says.

The duo set a goal of raising $10,000 and already has raised about $14,000, with about two weeks left in their campaign. They plan to ship the pre-ordered shirts in the next three to four months.

Mazur and Huang say they would like to launch an ecommerce site with a full line of apparel by the end of the year.

“Long-term, we would love to be based in Detroit and make our clothes in Detroit as well,” Mazur says.â€‹