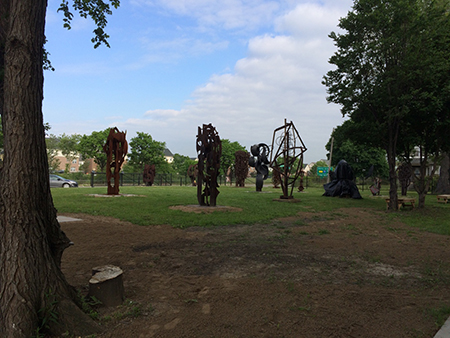 “(Early in my career) people were using found objects and other non-traditional materials in their work, tearing things apart and reconstructing them…,” Sestok says. “This period had a profound influence on my approach to art that is particularly apparent in my sculptural work.”

The garden, 955 Alexandrine St., features 29 sculptures with some measuring up to 15 feet high. The structures are made from steel purchased from scrapyards and steel companies, along with other reclaimed materials. Two sculptures are made with 500-gallon propane tanks.

Sestok, who grew up in Birmingham, attended the College for Creative Studies in Detroit and the Cranbrook Academy of Arts in Bloomfield Hills. He’s had exhibits at venues across Detroit, as well as in Grand Rapids, New York City, and Chicago.