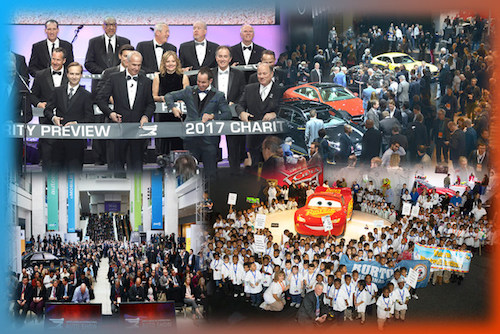 The North American International Auto Show at Cobo Center in Detroit came to a close on Sunday, wrapping up two weeks of showcasing automobiles and emerging technologies. A combination of new models and mobility platforms, along with a stretch of mild weather, drew 806,554 attendees to the show, down from 815,575 people who attended last year.

The show was a financial success, delivering an estimated $450 million in economic activity, says David Sowerby, chief financial analyst at Boston-based Loomis, Sayles and Co., which operates an office in Bloomfield Hills. That’s up from $403 million reported last year. Economists say the impact is equivalent to almost two Super Bowls every year in Detroit.

“Detroit is the mobility epicenter of the world, and there’s no better example of this than what we’ve seen and experienced at the NAIAS over the past 16 days,” says 2017 show chairman Sam Slaughter. “Visitors to the show were able to experience the full spectrum of the auto industry — from autonomous vehicles and technologies to current production models that will be in dealer showrooms in the near future.”

The NAIAS kicked off with the first-of-its-kind AutoMobili-D conference and exhibition, an innovative showcase over five days where companies displayed and discussed future mobility platforms.

“AutoMobil-D was an incredible venue for the entire mobility ecosystem, from newly formed startups to tech suppliers to automakers. It allowed each brand an opportunity to communicate directly with (more than) 5,100 journalists and nearly 40,000 industry decision makers,” says Rod Alberts, executive director of the Detroit Auto Dealers Association in Troy, the official host of NAIAS.

“It was as much about connecting businesses as it was about connecting technologies,” he adds. “From the hotels to the restaurants to the businesses all across the city, having NAIAS in January brings hundreds of thousands of people to Detroit during what would be a slow time of year.”