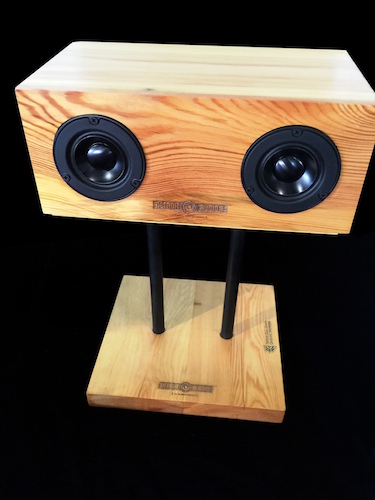 Detroit Audio Lab, an audio equipment startup, is set to launch a line of handcrafted premium speakers and audio gear called Made From Detroit, which will be manufactured using wood from abandoned properties in the city.

The company, which is headquartered and has a production facility in Detroit, will engrave each piece in the collection with the address the wood originated from.

“Made From Detroit reflects the very heart and soul of who we are,” says Mike Bauer, founder of Detroit Audio Lab. “Our products showcase and preserve Detroit’s history. Rather than dooming our structures to landfill, we breathe new life into them.”

One of the products from the Made From Detroit line includes the D: Audio Solo, a small, Bluetooth speaker with full range 2.5-inch drivers that can deliver bass up to 100 hertz and high notes up to 20,000 hertz. The speaker is accompanied with a Bluetooth 4.2 audio module that can support high-resolution audio data formats. The Solo operates on an internal rechargeable battery or it can be connected to an AC/DC adapter.

The D: Audio Riff is a larger speaker that has a two-way bass reflex system that is built with two spate chambers. The speaker contains two four-inch woofers and two one-inch domed tweeters, helping to create a clearer sound. The device can operate as a standalone system or it can connect to an entertainment system.

Detroit Audio Lab is using a Kickstarter campaign through Nov. 20 to support the launch of the speaker line. Those who make a pledge will receive a discount on Made From Detroit products.

“We’re building the foundation for an audio industry right in, and from, the same city that gave the world so much great sound,” Bauer says. “ It seems fitting that the sounds of Detroit are heard again through the wood and workers of Detroit.”