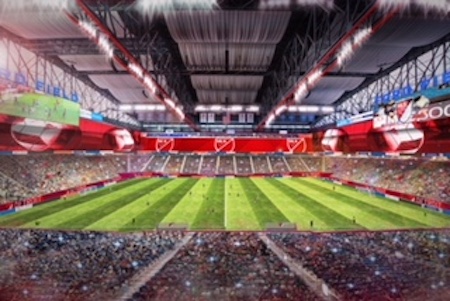 “The leaders of the Cincinnati, Detroit, Nashville, and Sacramento MLS expansion ownership groups have bold visions and innovative plans for their clubs, stadiums, and their involvement in their respective communities,” says Garber.

“We are pleased these highly-respected business and sports leaders have been so determined to bring Major League Soccer to their cities. We have been greatly encouraged by the progress that all four of these groups have made and we are looking forward to their presentations.”

“We are excited to be to be named as one of the finalists chosen to meet with Commissioner Garber and the Major League Soccer Expansion Committee in December, and look forward to sharing our bid proposal that would bring MLS soccer to Detroit,” says Arn Tellem, vice-chairman of the Detroit Pistons.

“Dan Gilbert and Tom Gores, together with the Ford family, create a powerhouse group that is unprecedented in professional sports and secures a perfect stadium location in the heart of Detroit’s central business and sports and entertainment districts. Sports franchises have a unique ability to unite and inspire people. Bringing a team downtown will further energize Detroit’s urban core and impact the community both on and off the field.”

The group originally had proposed building a 23,000-seat soccer stadium at the former Wayne County jail site at I-375 and Gratiot Avenue in downtown Detroit, but recently announced the switch to Ford Field. As part of the venue change, the Ford family is part of the proposed franchise.