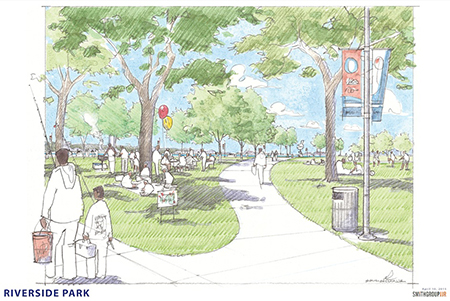 Detroit Mayor Mike Duggan today announced an agreement between the city and the Ambassador Bridge Co. for a $5 million expansion and improvement of Riverside Park and renovation of the exterior of the vacant Michigan Central Depot.

Under the agreement, the Ambassador Bridge Co., owned by Manuel “Matty” Moroun, will transfer 4.8 acres of waterfront property to the city to expand Riverside Park. Upgrades to the park in southwest Detroit, just west of the bridge, will include a new baseball diamond, soccer field, playscape, picnic and fishing areas, and new sidewalks. The Ambassador Bridge Co. will give $3 million toward the improvements.

“This agreement gives the city the land and funding it needs to create a marquee park at Riverside and give Detroiters even greater access to our riverfront,” says Duggan. “(The project) provides a dramatic improvement in the appearance of the Michigan Central Depot, making the future redevelopment of that landmark more likely.” 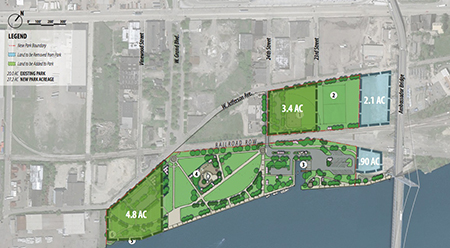 In turn, the city will convey three acres of land immediately west of the Ambassador Bridge for a possible second span. Visitors will still have access to the river at the site via a new promenade, or RiverWalk.

Ambassador Bridge Co. will also continue to add 1,050 windows to Michigan Central Depot, once the region’s main train hub. Vacant for years, the company recently installed a freight elevator to ease the installation of windows. The plan is to market the 18-story, 500,000-square foot structure to office tenants, supported by some retail activities.

Once the company receives the parkland, it will provide the city an additional $2 million to improve the seawall and add new sidewalks and benches along the riverfront. The improvements are expected to begin in 2018.