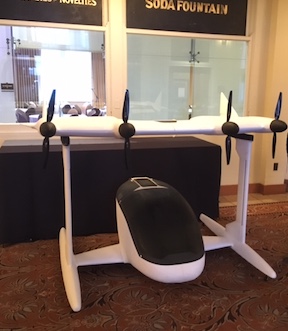 Due to recent advances in electric propulsion, electric batteries, automation, and lightweight materials, VOTL aircrafts are enabling a new way to travel by air, and experts say the “Jetsons-like future” is closer than we might think.

According to a recent study, the average urban American commuter spends 42 hours per year stuck in traffic. By comparison, passengers flying in a MOBi VTOL aircraft can reduce a 90-minute commute in stop-and-go traffic to six minutes by air.

“With MOBi, we will deliver a new experience in air transit and point-to-point air mobility. It will be a clean, quiet, stabilized flight experience that is accessible and affordable to the masses,” says Jon Rimanelli, founder and CEO AirspaceX and Detroit Aircraft, located at the Coleman A. Young International Airport in Detroit.

The aircraft has an electric motor, producing zero carbon emissions, and is significantly quieter than helicopters and airplanes. AirpsaceX is in the design and development phase, and will begin production on MOBi in 2020. The company is in partnership talks with aerospace and transportation companies to bring the technology and services to the public.

More information about AirspaceX and buying an aircraft can be found here.