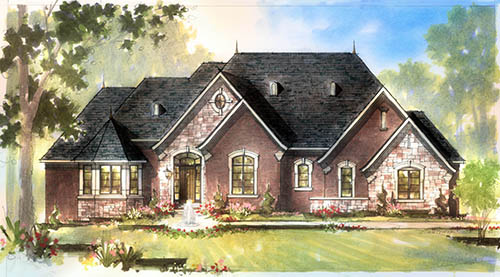 The long and extreme winter weather has put the upcoming 2014 Ultimate Homearama luxury home tour $2.5 million over budget, although the August opening remains on schedule, says Dominic J. Moceri, who leads the Moceri Cos. development division.

While Michigan builders usually face about a two month lull in activity — typically in December and January — that slowdown more than doubled due to low temperatures and continued snow, says Michael Stoskopf, CEO of the Home Builders Association of Southeastern Michigan, which is hosting Homearama.

“This is reflective of the broader market conditions — there was about a four month slowdown for everyone,” Stoskopf says. “Some of the (added expenses) were related to snow removal because you have to clean everything off before you can work that day. But temperature had the biggest impact, because when you’re trying to excavate dirt and the frost goes down four to six feet in some case, it’s like taking out chunks of rock.

“At one of the houses that got the latest start (in January), it looked like they were pulling out blocks for the pyramids,” Stoskopf says.

The frost began to release around the third week of March, says Stoskopf, noting that most of the six homes broke ground at The Pinnacle, at Silverbell and Adams Road in Oakland Township, in late November. “These guys were committed from day one. They were going to get this done.”

After the project’s charity preview on August 27, Homearama will be open to the public from Aug. 29-Sept. 14. The project is a public service activity of the HBA and aims to show off trends and one-of-a-kind concepts that are found in $1.8-$4 million custom homes.

For more information about the project — which includes homes by Arteva Homes, Cranbrook Homes, MJC Cos., and Moceris Cos. — visit HomearamaHBA.com. Advance ticket sales, with online discounts, will begin on the website in June.