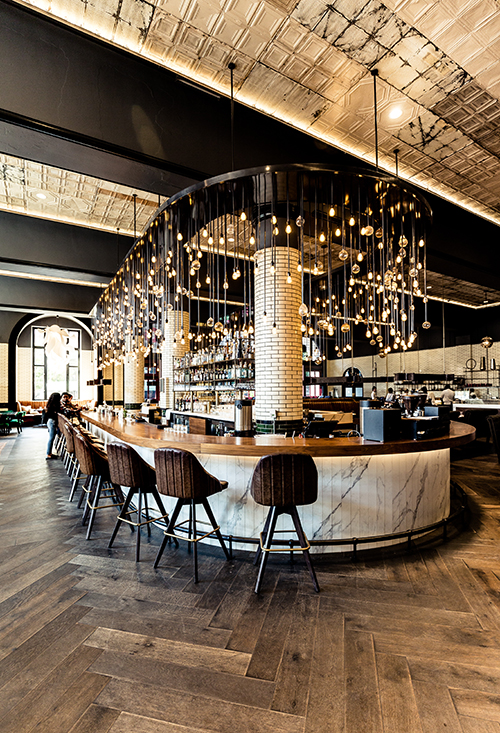 The contest aims to recognize the role of design in increasing competitiveness of local businesses, spur work by local designers and architects, and preserve the local identity of Detroit’s neighborhoods. The competition recognized 10 Detroit-based brick-and-mortar commercial projects, submitted jointly by business owners and design teams.

“The jurors for Commerce Design: Detroit chose businesses that celebrate the impact of commercial design in neighborhood businesses. Regardless of project size or budget, the winners exemplify everything we had hoped for when bringing this program to Detroit,” says Olga Stella, executive director of Design Core Detroit, a joint initiative of the College for Creative Studies and Business Leaders for Michigan.

The winners were selected from 37 submissions that represented a range of businesses, scales, and neighborhoods. The jury, which consisted of Elliott Broom, general manager of the forthcoming Shinola Hotel; Sylvie Champeau, project manager of Bureau du Design in Montreal; Najahyia Chinchilla, co-studio director of Workplace at Gensler; and Sandra Olave, chair of the interior design department at Detroit’s College for Creative Studies; conducted on-site visits to each of the finalist businesses to learn about the design process and the impact of the project on the neighborhood.

The program was developed more than 20 years ago in Montreal and is licensed in more than a dozen cities around the world, including Detroit.

“Montreal’s long-term investment into this program has made the case that good design can be additive in many ways,” says Champeau. “Thanks to the contest’s ripple effects, we have seen tangible improvement in the quality of places we visit and the experiences they offer. It’s such a joy to see it happening in Detroit.”

AIA Detroit, the local chapter of the American Institute of Architects, has supported Design Core in the management of the new program, which is presented by Bank of America with additional support from the Hudson-Webber Foundation and New Economy Initiative.

“These awards are a powerful reminder of the great work that’s taking place in Detroit, across a wide range of project types and scales, and in communities well beyond greater downtown,” says Charlie Klecha, managing director of AIA Detroit. “From internationally-renowned architecture firms to small, startup designers, Detroit’s design economy is a positive force lifting up businesses and communities across the city.”

Commerce Design: Detroit is one of more than 50 initiatives launched by Design Core and its Detroit City of Design partners as part of a larger strategy to champion inclusive growth. Design Core and AIA Detroit are striving to develop a culture in Detroit neighborhoods that uses design to create spaces that welcome everyone.