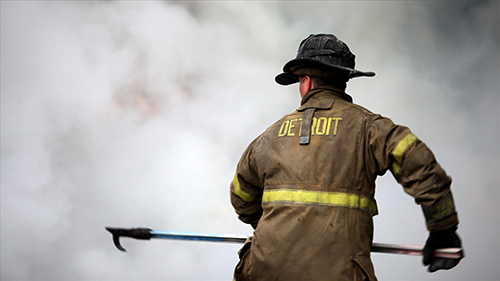 Actor Denis Leary and the producers of the 2012 documentary Burn will be in Detroit on Thursday to donate more than $260,000 in equipment and monetary donations to the Detroit Fire Department.

“We’ve kept in pretty close contact with the department since we started this project (Burn) in 2009,” says Tom Putnam, co-producer/director of the film, which followed Detroit’s firefighters over a period of 14 months. “We’ve been back many times since we finished filming for screenings or just to visit the people who we’ve become friends with. It’s exciting for us to not only tell the story of what the department has gone through but to be able to give something back and help solve some of the issues that we explored in the movie.”

To celebrate the project’s first donation, Leary, Burn’s executive producer, will host a screening of the documentary Thursday at the Fillmore Detroit at 7:30 p.m. All proceeds with go toward the Leary Firefighters Foundation to benefit Detroit firefighters. For more information, click here.

The department’s outdated equipment was among the key challenges identified in Burn, Putnam says, noting that the firefighters will be receiving new equipment including thermal imaging cameras, rescue gear, and carbon monoxide detectors.

“Tomorrow is the first major donation, but it’s going to be an ongoing process,” Putnam says. “As long as people keep buying the movie, the T-shirts, and the posters, we’ll keep writing checks. We expect to be helping spread the word and finding new equipment for these guys for many years to come.”

Putnam says the idea for the movie came after he and co-director/producer Brenna Sanchez visited the city’s fire station after reading about Walter Harris, a Detroit firefighter who died in 2008 during a fire in a vacant house. “We didn’t start off wanting to make a firefighter movie. We started out by seeing what was happening here and wanting to tell that story,” Putnam says.