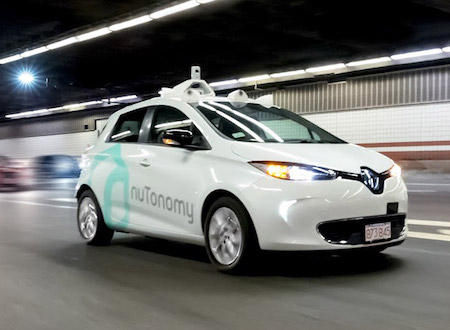 Delphi Automotive, which operates its North American headquarters in Troy, today announced an agreement to acquire NuTonomy Inc. for an upfront purchase price of $400 million and earn-outs totaling approximately $50 million.

Founded in 2013, NuTonomy is developing a proprietary full-stack AD software solution for the global AMoD market, with a focus on urban districts. The company will add more than 100 employees, including 70 engineers and scientists to Delphi’s AD team, which currently consists of more than 100 members. The deal will also increase Delphi’s access to new customers and markets in the evolving mobility industry.

The acquisition is the latest in a series of investments Delphi has made to expand its position in the new mobility space, including the acquisition of AD software developer Ottomatika and data service companies Control-Tec and Movimento.

“The combination of the NuTonomy and Ottomatika AD teams, along with Delphi’s industry-leading portfolio of perception systems and smart vehicle architecture solutions, further enhances our competitive position as the industry’s most formidable provider of autonomous mobility solutions,” says Kevin Clark, Delphi’s president and CEO. “This transaction is another example of our ongoing dedication to developing, implementing, and commercializing the highest performing and safest AD system available.”

Upon completion of the transaction, Delphi will have AD operations in Boston, Pittsburgh, Singapore, Santa Monica, and Silicon Valley. NuTonomy will continue to be based in Boston, where both companies currently operate AMoD pilot programs.

Combing efforts with NuTonomy in Boston, Singapore, and other pilot cities globally will give Delphi a total of 60 autonomous cars on the road in three continents by year and, with the goal to further accelerate global fleet expansion and technology development.

NuTonomy was founded by two leaders in the autonomous vehicle space, Drs. Karl Iagnemma and Emilio Frazzoli of MIT. The company employs experts in perception, motion planning, and decision making with PhDs from MIT, Caltech, NUS, and other leading academic institutions.

“Our mission has always been to radically improve the safety, efficiency, and accessibility of transportation worldwide,” says Iagnemma, CEO of NuTonomy. “Joining forces with Delphi brings us one step closer to achieving our goal with a market-leading partner whose vision directly aligns with ours. Together we will set the global standard for excellence in autonomous driving technology.”

The transaction is subject to customary closing conditions and is expected to be completed before the end of the year.