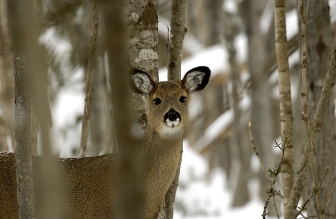 Deer hunters in Michigan harvested about 329,000 deer in 2014, a drop of about 15 percent compared with 2013, says a new report issued today by the Michigan Department of Natural Resources.

“In the Upper Peninsula, winter started early with more than 3 feet of snow on the ground in some areas before the Nov. 15 opening of firearm deer season,” says DNR Brian Frawley, wildlife biologist for the Michigan DNR. “Though not as severe as the previous season, this marked the third consecutive rough winter for the deer population in the U.P.”

“Across Michigan, 39 percent of hunters said they were satisfied with their overall hunting experience, with the highest satisfaction in the Lower Peninsula,” Frawley says.

Although the overall number of license buyers was down from 10 years ago, an increased number of people younger than 14 years old and people older than 50 bought a hunting license last year. The Michigan DNR continues to promote hunting to younger hunters and female hunters, whose numbers are rising.

According to the Farmers’ Almanac, the 2015-2016 winter in Michigan and the surrounding states will be colder than normal and snowfall will also be above normal, which could signify lower deer counts.

According to the latest report generated in 2011, hunters in Michigan spend about $2.3 billion on trip-related expenses and equipment per year.

IN RELATED DNR NEWS, Michigan fisheries this spring stocked a total of more than 20 million fish that weighed more than 325 tons.

“It was another outstanding spring-stocking season that will bring significant benefits and fishing opportunities to Michigan,” says Ed Eisch, fish production manager for the Michigan DNR.

Eisch says fish stocking activities help pump between $2.4 billion and $4.2 billion into the state’s economy through the sportfishing industry and associated businesses.