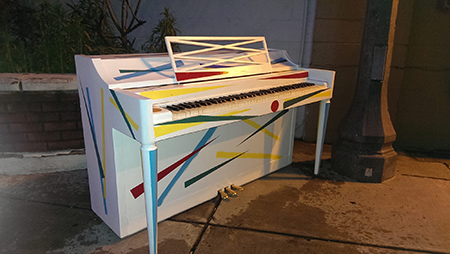 Detroit nonprofits have partnered to bring local artist-decorated pianos to public spaces across the city of Detroit next month.

The pianos, donated by area residents, will be painted by Detroit-based artists Marlo Broughton, Tylon Sawyer, and Keri Mortimer at the Red Bull House of Art in Eastern Market. The pianos will then be placed at the Ford Resource and Engagement Center in Southwest Detroit, Belle Isle Park, and in the Osborn neighborhood in northeast Detroit.

Keys in the City, a metro-Detroit based nonprofit that brings decorated pianos to outdoor spaces, the Detroit Institute of Arts, and Forward Arts, an arts program that works on initiatives to support Detroit’s arts communities, have partnered to sponsor the project.

“Interactive art is hard to come by, and people love it,” says Larry Grudt, executive director of Keys in the City. Grudt says he’s seen success with the program in Lansing and East Lansing.

A documentary film, Keys in D, will be filmed by Mark Einhaus of Farmington Hills-based Media Hero to chronicle how the program unfolds in Detroit.

The pianos will be unveiled on Aug. 6 at the Ford Resource and Engagement Center, with performances by notable pianists and fare from Detroit restaurants.