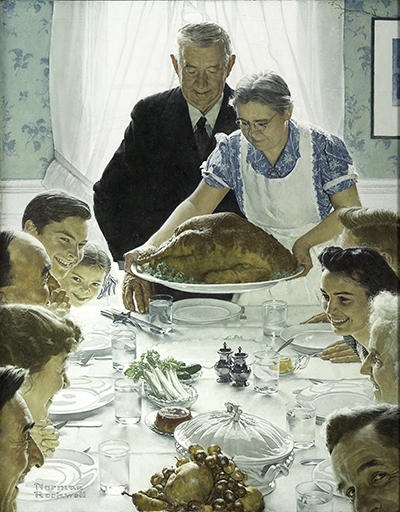 An exhibit featuring the work of American artist Norman Rockwell will be housed at the Henry Ford Museum of American Innovation in Dearborn from Oct. 13, 2018-Jan. 13, 2019. “Enduring Ideals: Rockwell, Roosevelt, and the Four Freedoms,” is an internationally touring exhibition organized by the Norman Rockwell Museum.

The show illuminates the historic context in which former U.S. president Franklin D. Roosevelt articulated the four freedoms and the roll artist Norman Rockwell’s paintings played in bringing them to life for millions of people.

“Similar to the stories we share within the museum’s ‘With Liberty and Justice for All’ exhibit, the Four Freedoms are a testament to the importance of human rights and dignity,” says Patricia Mooradian, president and CEO of The Henry Ford. “This exhibit tells a story that is still relevant, resonating across generations as strongly today as the original images did in their time.”

“Rockwell, Roosevelt, and the Four Freedoms” provides a rare opportunity to see the famous paintings, as well as other works by Rockwell and his contemporaries. It includes interactive digital displays and virtual-reality technology.

Patriotic artists, most prominently Rockwell, along with the White House and the Office of War Information, helped support and promote Roosevelt’s four freedoms – freedom of speech, freedom of worship, freedom from want, and freedom from fear. The freedoms have since inspired dozens of national constitutions around the world.

Rockwell’s work became a national sensation in early 1943 when they were first published in The Saturday Evening Post. Roosevelt’s words and Rockwell’s art soon became inseparable in the public consciousness, with millions of reproductions in American homes and workplaces.