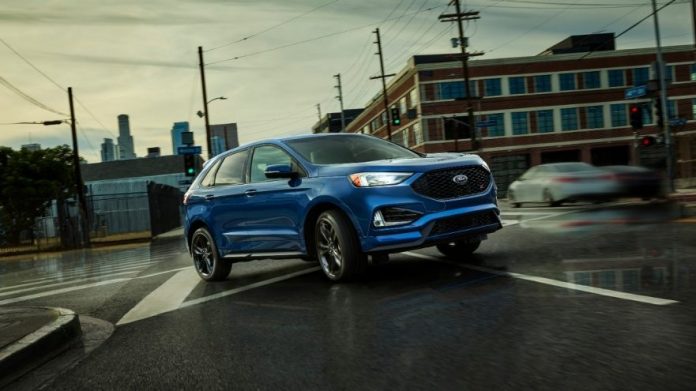 Ford Motor Co. in Dearborn today unveiled its all-wheel-drive disconnect, which detects driving conditions and automatically shifts between two-wheel and all-wheel drive. This first-for-Ford technology is available on the new 2019 Ford Edge.

The feature provides all-wheel traction when needed and helps reduce fuel consumption when it’s not. It uses a form of artificial intelligence based on information received from dozens of sensors and can determine in a fraction of a second whether all-wheel drive is needed.

“The concept is pretty simple. It was the execution that was the challenge,” says Scott Beiring, driveline applications supervisor for Ford. “Shifting between two- and all-wheel drive needs to be fast and seamless enough that the customer doesn’t know it is happening.”

A new dedicated electronic brain interacts with the traction control system to detect wheel slip and receives input from the anti-lock brakes to learn whether that system is active. It can also detect whether the windshield wipers are on, whether Edge is towing a trailer, and the outside temperature.

Using all of the data, the system can detect in 10 milliseconds the need to engage or disengage all-wheel drive. It can also quickly distribute up to 100 percent of the available power from the front to the rear wheels, depending on driving conditions.

“Fuzzy logic refers to the algorithm,” says Beiring of the algorithm the electronic brain uses. “It’s like you or I determining what to wear based on reading a weather forecast, where we’re going, the time of year, and looking outside. In the case of the new Edge, just because the windshield wipers are on doesn’t mean all-wheel drive is going to engage. The algorithm makes the call based on a variety of things that are happening – but much faster than a person could process.

“There are similar systems out there, but none quite like this. The fact that we’re able to switch seamlessly and without any input from the driver, that’s the real magic.”

The Edge and Edge ST are due to arrive in showrooms later this month.