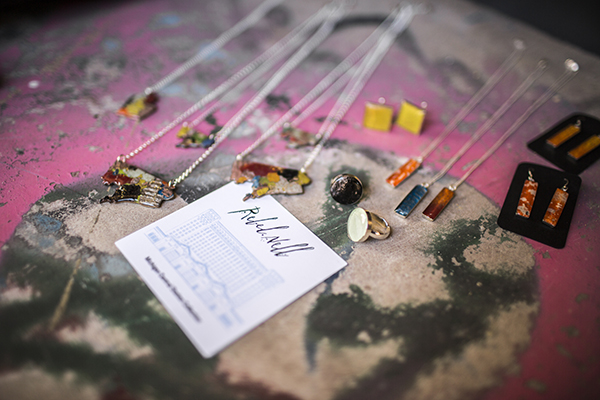 Ford Motor Co. in Dearborn, which is converting the station and nearby properties into a R&D mobility campus, has commissioned Rebel Nell to design the jewelry.

The station was closed in 1988 and has remained vacant since.

“There is a story in every piece,” says Shawn H. Wilson, manager of community engagement at the Ford Fund. “Over the years, Michigan Central Station became an artist’s playground. Artists went there to perfect their craft and build their brands. Part of the reason we’re doing this is to pay homage to the artists.”

Ford and Rebel Nell’s co-founder and CEO, Amy Peterson, worked together to collect only fallen graffiti from the 500,000-square-foot building. Rebel Nell has also repurposed graffiti from the Dequindre Cut, where they employed their “no peel” policy.

“We have respect for the muralists and the artwork they left behind,” says Peterson. “It’s an amazing project to be a part of. The jewelry is a unique way to preserve and commemorate the legacy of the muralists who for decades left their mark on an iconic building.”

The collection features 300 unique pieces ranging from $30-$225, including pendants, pins, cuff links, and bar necklaces. Pendants are available in the shape of Michigan’s mitten and Detroit’s geographical shape.

“We had an amazing response the first day we launched,” says Peterson. “Each piece is one-of-a-kind. No one is going to have the same piece you have.”

Rebel Nell began working with Ford more than a year ago when the company participated in the Ford Resource and Engagement Center accelerator competition for social entrepreneurs, where they won and were awarded $25,000 to help expand their business. The company operates in a shared workspace in Corktown’s Ponyride and strives to help disadvantaged women transition to full-time employment.

Proceeds from the Michigan Central Collection will benefit the Coalition On Temporary Shelter, a nonprofit organization that provides housing and other services for the homeless; Vista Maria, a community resource for disadvantaged children and their families; Love Runs, which raises funds to fight modern-day slavery in Michigan; and Covenant House, which supplies shelter and support to homeless, runaway, and at-risk youth.

Rebel Nell has been employing women as creative designers since its launch in 2013.