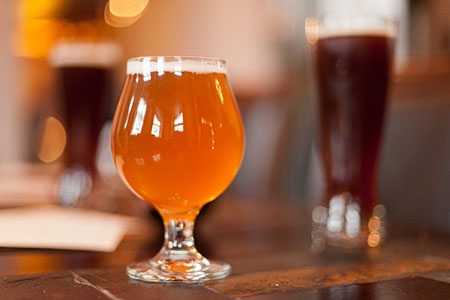 With the framing up and brew kettles delivered, the Dearborn Brewery — the city of Dearborn’s first microbrewery — is in the home stretch for a possible opening in April.

“We’ve shot well past what we thought would be our opening date, so we’re trying to keep everyone up to speed and see where we’re at,” says John Rucinski, who co-owns the business with his wife, Sheila. “If everything lines up perfectly, we could open by April.”

Rucinski says the 2,500-square-foot facility, at 21930 Michigan Ave. (near Oakwood Blvd.), has received federal approval and just set up a meeting with the Michigan Liquor Control Commission to pursue state licensing. “That’s one of our last big hurdles, because then we can make beer without going to jail,” he says with a laugh.

He says the microbrewery will have six taps, and will likely start things off with cream, amber, pale, and brown ales, in addition to some seasonal brews. Each beer will be prepared in a seven-barrel batch, with each barrel holding 31 gallons.

“I’m toying with some (beer names), but I haven’t finalized anything just yet, mostly because there’s no real priority on it since we’ll just be serving on site once we open,” says Rucinski, who has been home-brewing for almost 15 years now. “Once we get into packaging and distribution, then it will be more important to come up with names so we stand out.”

The building, which has a maximum capacity of 80 people, although seating numbers are still being determined, does not have a kitchen, though patrons will be welcome to bring food in from home or nearby businesses, Rucinski says.

Dearborn Brewing has received considerable interest from the community. A Kickstarter campaign for the renovation surpassed its goal of $25,000 last May.

“The question I hear most is, ‘When are you guys going to open?’” Rucinski says. “The feedback has been great; everyone has been waiting patiently and cheering us on. We want to be open already, but we still have to jump through the few hoops that are still in front of us.”

In the meantime, the business is already selling microbrewery-related merchandise, including growlers, pints, and apparel.