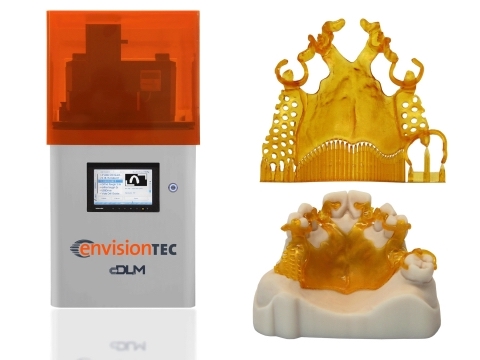 The Vida cDLM is the second 3D printer based on EnvisionTEC’s patented Continuous Digital Light Manufacturing technology, which allows for faster and more accurate 3D printing with fewer supports.

The new edition will have limited availability in the second quarter, with a full production launch to follow. The Vida cDLM gets its speed from the continuous motion of the build platform in the Z-axis, while its accuracy is attributed to an XY resolution of 50 microns and a Z resolution range of 25-150 microns, depending on material.

“EnvisionTEC is proud to partner with leading dental professionals around the world on the development of new 3D printers and materials that are transforming the way custom dental parts are made,” says Al Siblani, CEO of EnvisionTEC. “Our expanding dental 3D printer line is (known for its) productivity, accuracy, and flexibility of materials.”

The original Vida launched in 2015 and has helped increase the company’s unit sales by 29 percent in 2016. Overall, 3D printer sales increased 75 percent throughout the dental industry in 2016.

Founded in 2002, EnvisionTEC currently sells over 40 different printers based on six distinct technologies, and serves a variety of medical, professional, and industrial markets. The company’s intellectual property includes more than 100 pending and granted patents and 70 proprietary materials.