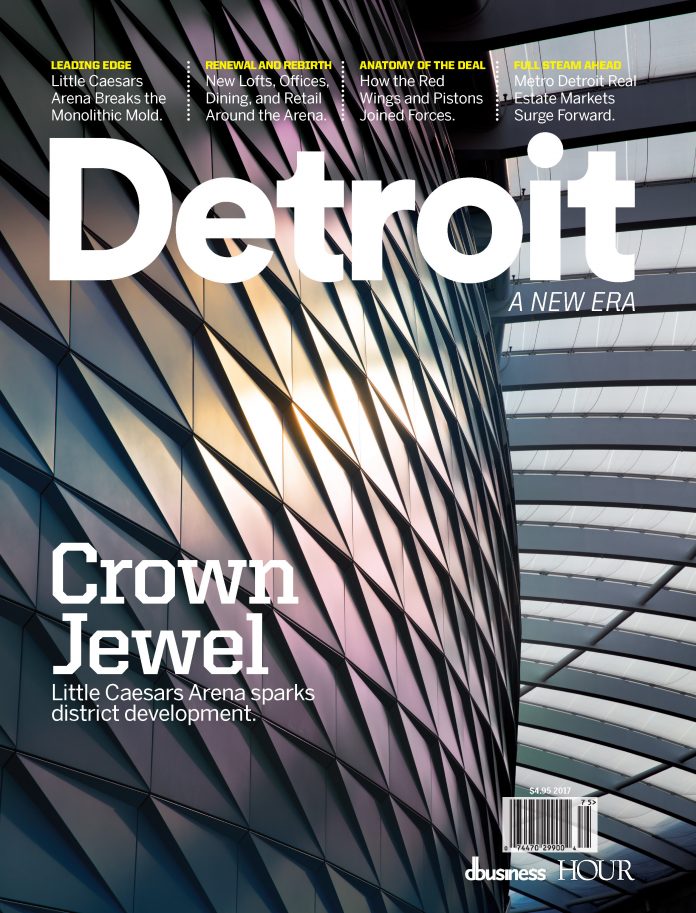 The Alliance of Area Business Publishers, which represents 70 regional and local business publications primarily in the United States, awarded one gold, three silver, and two bronze citations to DBusiness magazine as part of the Editorial Excellence Awards competition for 2017 coverage.

The magazine garnered a gold award under the category of Best Ancillary Publication for Detroit: A New Era, a one-time publication which covered the opening last September of Little Caesars Arena. In addition to reporting on the planning, design, development, and construction of the arena, the magazine examined the impact of the surrounding 50-block area called The District Detroit.

Since 2011, DBusiness magazine has received 10 gold, 10 silver, and 13 bronze citations in the Editorial Excellence Awards from the Alliance of Area of Business Publishers, including being named the top regional business magazine in the country.

For DBusiness magazine’s 2017 coverage, the panel of judges from the University of Missouri School of Journalism noted the following:

Strengths of Detroit: A New Era are the depth of reporting on the arena design, as well as coverage of surrounding area redevelopment. Design and production are outstanding, with a variety of documentary photographs, aerials, portraits, illustrations and infographics. There is a great mix of reporting types, including briefs, graphics, local business listings, and longer features. DBusiness clearly put resources into this publication to make it useful.

This a profile of a family member summoned on a rescue mission to save the Polk and Co. family business. He succeeded by transitioning it into the digital age. When Stephen Polk, a wildlife biologist by education, had to step in, the company was $200 million in debt. He sold it for $1.4 billion. Now the “low-key soft-spoken” Polk remains involved in many businesses and organizations. He is a cheerleader and philanthropist for the city. Good reporting and good writing has produced an entertaining and informative profile.

A public corruption scam, totaling $10 million, engulfs the retirement pension fund for Detroit’s police and fire departments. Michigan’s premier golf resorts lure vacationers from near and far by spending millions to upgrade their facilities. A city’s redevelopment project, with tangled political and economic implications, raises questions about who benefits and who pays for that. Norm Sinclair tells these stories with significant details to provide the ultimate in civic clarity with his reporting.

This investigation into a private-public deal to build new city offices sheds light into the troubled history of the project. DBusiness stitches together in detail how the project came together and provides insight to readers.

DBusiness takes a fresh and humorous approach to the typical CEO portrait by photographing Stephen Polk in a suit surrounded by penguins. This is a perfect way to illustrate the story. The reduced number of colors gives it a contemporary feel. A sense of dimension is displayed by type and penguins overlapping Polk, while he overlaps the nameplate and more penguins.

DBusiness covers combine text and photographs in a sophisticated, informative manner. Content pages are well-designed to help with easy navigation. Typographic treatment fits the tone and content of the article and is used to create interesting pages.

The annual Editorial Excellence Awards is coordinated and judged by faculty in the University of Missouri School of Journalism. The purpose of the competition is to encourage a high level of journalistic performance and service to communities by recognizing editorial excellence and outstanding visual presentation in regional business publications.