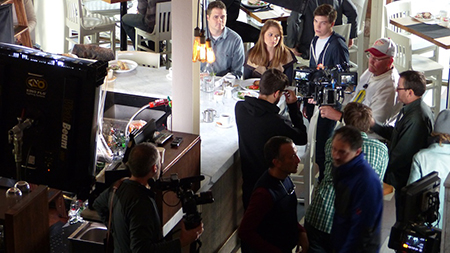 RedOrange USA, a film and video production company in Birmingham, just wrapped up filming for a commercial starring Pavel Datsyuk of the Detroit Red Wings, who will play for Russia’s National Team in the upcoming Winter Olympics. The commercial, for a Russian telephone company, will air throughout Russia during the Sochi Winter Games in February.

“It’s not often that we get to host a Russian advertising agency (Leo Burnett) from Moscow, a cinematographer from Rome, and a director from Barcelona,” says Barry Meier, executive producer of RedOrange. “There’s probably 150 people involved in this production, many whom are staying at the Townsend Hotel (in Birmingham). There’s a lot of local commerce that’s coming out of this.”

Roughly 90 locals were involved with the project, including local production assistants, wardrobe personnel, and various artists. Nearly 50 actors were used as either background or principal characters.

“We love our hometown, and this project allowed us to highlight the capabilities in both production and post-production,” Meier says. “And while (Director) Michael Bay brings his Transformer crews here once every few years, the majority are out-of-towners. At RedOrange, we put the local talent to work.”

Filming took place at five different locations, ranging from Social Kitchen in Birmingham, which was transformed into a Russian eatery, to Beaver Creek Restaurant in Westland, which was styled to look like a Sochi sports bar. “We transformed (Beaver Creek) using Russian posters and jerseys. It was a pretty extensive set dressing project,” Meier says. Pierce Street in Birmingham also was transformed to appear as a snow-covered street.

The production company will begin editing the project today at Ringside Creative in Oak Park.

Other recent projects by RedOrange include commercials in Stuttgart, Germany for Mercedes; in Slovenia for Toyota Land Cruiser; and in Bloomfield Hills for the GMC Denali.