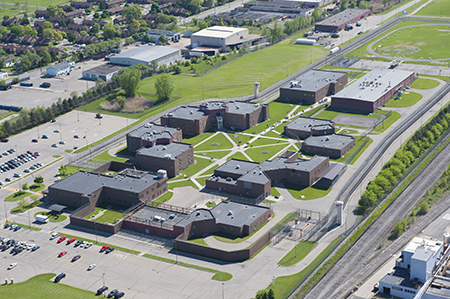 After officials accessed the potential for restarting construction of the Wayne County Jail project at I-375 and Madison in downtown Detroit Thursday, one of the key entries into the resurging central business district, Quicken Loans founder and chairman Dan Gilbert was quick to blast the plan as short-sighted and misguided.

Gilbert, who owns the nearby Greektown Casino and numerous other downtown structures, had offered to pay Wayne County $50 million for the failed jail project, which is roughly one-third completed, along with two neighboring jails and the Frank Murphy Hall of Justice — which he proposed to replace with a multi-faceted residential, hotel, and entertainment district. The deal is still being studied, and if approved, would assist Wayne County with relocating its judicial and jail operations to the east side of Detroit at the half-empty Mound Road Correctional Facility, or other locations.

The planned 2,000-cell, 700,000-square-foot jail at I-375 and Madison is the subject of an ongoing lawsuit between the county and the contractors on the project. In January, the county sued the contractors, including Detroit-based Walbridge and partner DCK, to recover what it claims were $160 million in damages (even though invoices showed $70.7 million had been spent on construction at the time the County ordered a halt in work in June 2013).

The contractors, through their respective legal teams, claimed the County was largely to blame for the numerous cost overruns that halted the project. “They bought a Chevy and then gave us plans for a Rolls-Royce, and then complained that we weren’t sticking by the price of the Chevy,” said Dan Blevins, a shareholder with the Auburn Hills-based law firm of McAlpine, which is representing Walbridge-DCK in the lawsuit.

His comments appeared in an investigative report, “Jail Break,” that appeared in DBusiness magazine (July/August 2014). To read the article, click here.

“The prospect of building a brand new, $400 million jail as the ‘welcoming’ structure at the gateway to downtown just off the busiest freeway exit into our urban core at the very same time Detroit’s center is undergoing an unprecedented positive transformation should outrage every single citizen, business, and government official of our great city. At the exact moment we finally have the momentum and scale to overcome decades of decline as well as the increasingly inaccurate image and perception of Detroit being a crime-ridden decaying city, it is unfathomable there is even a thought of continuing on with a project that would put a massive county jail at the foot of the entry to downtown.

“This critical land must be developed into uses that are consistent with a city that is on the rise and creating the environment to attract brain-economy companies and the kind of high-wage jobs that these businesses produce as well as residential and commercial projects that accompany this kind of growth.

“Detroiters deserve better than local leaders moving forward with a short-sighted reckless plan because it may be viewed as an easier path at this point in time. Let me not mince words: Building this jail at this crucial location would be nothing short of an unmitigated disaster that will echo with negative implications for downtown and the city for decades to come.

“There are several well-thought out alternatives that are light years better for Detroit and Wayne County that over the long run will also be economically favorable as well. It’s a new day in Detroit and it is time we start learning from some of the senseless and illogical bad decisions of the past by not repeating them. It is clear that locating a major brand new jail at the foot of the busiest gateway to downtown Detroit would rank among this region’s worst decisions of all-time. All of us: The county, city, state, business community, and citizens must come together and do much better than implementing a long-term abhorrent plan for the gateway to downtown Detroit.”