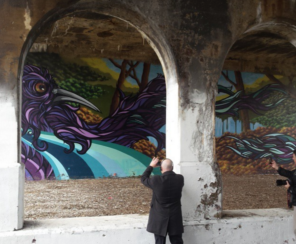 A new Detroit-based company, Urb Appeal Tours, has launched and is now offering customizable, guided tours and group outings throughout the city.

“Our mission is to help people truly understand Detroit,” says Jon Chezick, founder of Urb Appeal Tours, who has led tours for more than six years in the city. “I’ve seen it thousands of times — the more people see and know about Detroit, the more they love it. We don’t sugarcoat the city’s problems during our tours, but instead try and put Detroit’s challenges into historic and systemic context.”

He says the company’s tours — offered in a bus, walking, dining, bar, or scavenger hunt format — can be themed around a variety of topics, such as its Spirit of Detroit Tour, where groups get an overview of the past, present, and future of the city, and its Innovation Tour, which gives groups the opportunity to visit projects in the city and hear from innovators.

Geared towards companies and organizations trying to attract and retain talent, schools and universities, conferences, and out-of-town visitors, Urb Appeal Tours visits Detroit landmarks such as Campus Martius Park, the Guardian Building, the RiverWalk, and the Fisher Building, as well as neighborhoods surrounding the downtown area.

The company is not offering public, scheduled tours at this time. However, private guided tours can be booked throughout the week. Pricing, which depends on the size of the group and what tour or outing is selected, starts at $150 for a small walking tour.